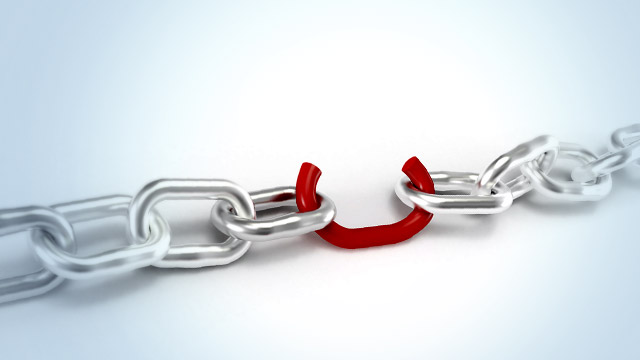 I posted a very short article where I discussed one salesperson's reaction to a great sales role play.  I received a number of emails telling me how helpful the video, story and lessons were.

The article highlighted Self-Limiting beliefs or negative self talk. Today we will take it a step further and discuss the other things that could have been at play - hidden weaknesses - and the interference they cause salespeople while selling to their prospects.  Like chains, salespeople are only as strong as their weakest link...

The salesperson (let's call him Fred) really believed – from conviction – that the approach was too direct.  I had challenged his personal values and when you challenge someone’s values they will usually dig in their heels.

Suppose someone else in the room felt exactly the same way as Fred, but wasn't as comfortable confronting me as Fred was.  Would that have been any different?  Yes, it certainly would!  Their fear of confrontation would suggest that they have a need to be liked - technically known as Need for Approval - a very common, yet hidden sales weakness that prevents salespeople from asking questions and pushing back for fear that the prospect will not like them anymore.  I don't believe that Fred has this weakness or he would have been too uncomfortable confronting me and digging in his heals in front of the group.  He was definitely not uncomfortable when he made his case!

To say that Need for Approval gets in the way of selling is an understatement.  This weakness alone can interfere with the execution of every stage of the sales process.  For example, it's crucial that modern salespeople have the ability to take a consultative approach in order to differentiate themselves from the competition.  A consultative approach requires asking a lot of questions, pushing back, punching holes, and sometimes, gently confronting. Salespeople with the need to be liked simply will not do that.

When Fred reacted, we were in a role play where we were having a financial conversation.  His reaction could have been triggered by his own discomfort talking about money, a hidden weakness that prevents salespeople from having financial conversations.  Salespeople with this weakness often skip over financial qualification steps and can't dive in for a deeper discussion when there is a challenge finding enough money to pay for what needs to be bought.  Those salespeople often under or over propose because they always fail to learn exactly how much money their prospects will spend with them.

Today it is more difficult than ever to be successful in sales.  The most important take away from these examples is that when salespeople further complicate the modern challenge of selling with their own weaknesses, success becomes even more unlikely and difficult to achieve.

Make sure you read Dan McDade's article - part 3 in his lies or myths series - on sales and marketing alignment.