The Crucial Step Missing from Most Sales Training Programs

As an example, I had such an experience with Safelite, whose website claims that they are the #1 auto glass specialist in the country.

I had a ding in my windshield and scheduled Safelite to come to my office to repair the windshield.  Easy!  In the middle of the repair, the technician called to let me know that the windshield had cracked to the bottom and that this happens sometimes with repair attempts.  Frustrating but Okay, so I needed to know, if my repair payment would be applied to a new windshield and how soon I can have that completed.  The technician was vague but he said not to worry - it would be taken care of.  I should have known from his vague response that he knew transitioning from a failed repair to a windshield replacement was not one of Safelite's strengths!

Over the next 24 hours, I didn't hear from Safelite so I reached out to customer service.  I left a voicemail, sent an email, and sent a text.  Nothing!  Frustrated, I looked at the other options for windshield replacement but there weren't any - Safelite had bought up all of the competitors!  I had no choice but to schedule the windshield replacement through Safelite so I did.

By now the crack created by Safelite (that's one way of up-selling from a repair to a replacement) was quickly expanding in three directions. Time was of the essence but the first available slot was two weeks away but beggars can't be choosers so I booked it.  A week later, customer service finally responded to my email but their response had little to do with what I asked them.  I began receiving reminder emails and texts telling me to be on time at two weeks ahead, 1 week ahead, 2 days ahead, 1 day ahead, 12 hours ahead and 30 minutes ahead.  I pulled into their shop at the scheduled time, having blocked out the morning to get the repair completed.

Wow, that was an intelligent question but I digress.  "Yes."

"We have a problem."

"We don't have the windshield for your car."

I said, "You've been texting me non-stop to make sure I was here at 8am.  If you didn't have the glass, couldn't you have let me know last night?"

He replied defensively, "First, I haven't been texting you - that's done from Ohio.  I have nothing to do with that.  Second, the glass is delivered overnight so we wouldn't have known last night and yours wasn't delivered. I'm trying to find it now"

Did you notice how well he diffused the situation and lowered my resistance?  Not.  He basically said, "Hey, it's not my fault!"  How about, "I am so sorry."  Or,  "Wow, we really screwed up."  Or,  "You must be really upset."  Or, "I feel terrible - this was totally unfair to you."

I'll save you from the rest of his ugly conversation with me and fast forward to the call I received later that day.  Brooke was calling to reschedule and she offered me a date two weeks out.  I reminded her that I had scheduled this two weeks earlier - with her - and I didn't understand why they would need another two weeks to get my windshield, especially in light of what had happened earlier that day.  She said, "You probably didn't schedule it with me."

She said, "Well, that doesn't matter."

I was thinking that this arrogant, defensive, ass-covering attitude was part of the culture at Safelite.  I said, "I'm not going to schedule a date two weeks out and have this happen again.  Call me when you have the glass in your possession and then I'll schedule it."

I don't think Safelite has a sales organization or has to worry about up-selling or renewals.  They are the only game in town over much of the country.  Can you imagine what would happen if they actually had competition or had a sales organization worrying about how much business they would lose to those competitors with customer service as bad as theirs?  No wonder they gobbled up their competitors!

There is a lesson here for those of us in the sales development space.  When we train, coach and develop salespeople, we must demand that customer service get the training and coaching required so as to not sabotage the great work we do with sales organizations.

[UPDATE 9-24 Guy S. from Safelite reached out to me today and made everything right, had my windshield in his possession, scheduled the replacement, apologized for the way this was handled and for how I was treated.  Thanks Guy!]

[UPDATE 9-27 Guy S. From Safelite called again and said the windshield was inspected and he offered to pick up my car, drive it to their shop, and return it to me when finished.  Thanks Guy!]

[UPDATE 9-29 All's well that ends well.  Guy S picked up my car at 8am, drove it to the Safelite shop, oversaw the windshield replacement and calibration, and returned the car to me a short time later.  This ended the fiasco that began a month earlier on a good note.  Guy, you're the best.  This is Guy with my car and new windshield. 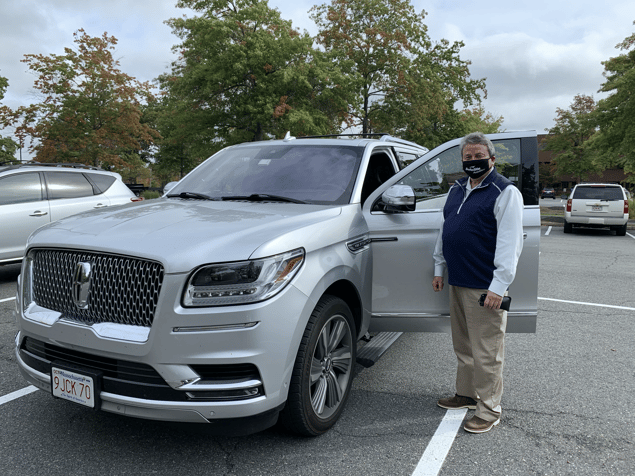