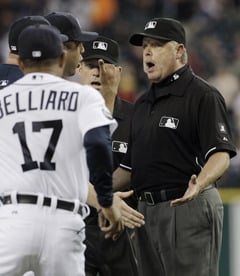 If you're a baseball fan, you've probably heard all about Jim Joyce's horrendous call that cost Detroit Tigers pitcher Armando Galarraga a perfect game.  It would have been just the 21st perfect game in Major League Baseball history.  The worst part about this baseball tragedy was that the perfect game was a sure thing!  There were two outs in the ninth inning when Galarraga induced a ground ball to first and everyone in the park and watching on television knew that would represent the final out of a perfect game.  And that's when Joyce became the  focus of the game by calling the runner, Jason Donald, safe.

The certain perfect game is just like the sure things that your salespeople report. "We're gonna get this business - it's a slam dunk."  Or, "Everything has been agreed to - just waiting for final approval."  Or, "We're the only ones they're talking to - it's ours for the taking!"  And then...it isn't.

What hasn't been talked about quite as much is what Jim Joyce did after the game.  In the rarest of all events, he apologized.  Are you kidding?  Umpires never admit they made a bad call or got a call wrong.  But Joyce said, "It was the biggest call of my career, and I kicked the [stuff] out of it, I just cost that kid a perfect game."  Wow.

Taking responsibility is the start to changing behaviors and outcomes.  As long as your salespeople are allowed to make excuses nothing will ever change.  When you get your salespeople to say, "My fault - I wasn't effective enough", things will change because they'll be forced to ask the next question, "So what could I have done differently?"

We know what Jim Joyce could have done differently.