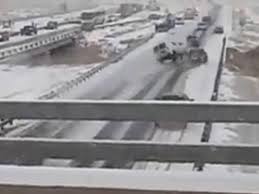 Today, you'll receive multiple articles and a bonus video too!

The Sold Lab portal posted this article of mine, "Why Sales Training Doesn't Work".

Then, Evan Carmichael did a terrific job interviewing me for this video on his YouTube channel.

Today's article is a follow-up of sorts to this article from yesterday.  It would help to read that for context if you haven't already.

So we're back in the snow.

Yesterday, during our morning huddle, the team was talking about how hard it had snowed the previous two days.  I mentioned that in the past two days, my 50-minute roundtrips had totaled 4 hours of white-knuckle driving.  It was stressful and exhausting because I could barely see out the windows due to heavy snow and ice piling up, there was no visibility as it was snowing at a clip of about 2-3 inches per hour, I couldn't control the cars that were sliding past me and in front of me, and I knew that if I had to stop, I couldn't.

Rocky's wife encountered a similar scenario on her flight from Florida to Albany as the pilot began the flight happy, funny and relaxed, and presented all the sites as the flight headed north.  When he entered the heavy snow zone near Albany, he was back on the intercom but this time sounding very serious, very stressed, and very short.  He ordered all of the flight attendants back to their seats, ended cabin service, and warned that the visibility was so bad he may have to divert the flight to another airport.

We are talking about a driver with 42 years experience driving in the snow and a commercial airline pilot with probably 30 years experience flying in the elements.  Yet in both of these scenarios, the experience wasn't enough to keep it from being extremely stressful and dangerous.

Rocky mentioned that my scenario might mirror exactly how it feels to be a new salesperson, or an experienced salesperson who isn't being onboarded properly at a new company.  New salespeople could easily be experiencing the white-knuckle syndrome, have difficulty seeing ahead, feeling like the car won't stop, and just being totally out of control.

Here is an article that I wrote seven years ago about how to onboard new salespeople and it still holds true today.  Enjoy.