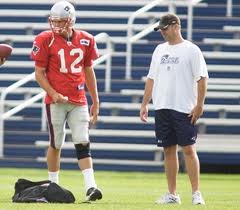 Unless you lived in a cave in Afghanistan during the past two months, you heard about the scandal involving people associated with Penn State University's football team and coaching staff.  I won't discuss any of the nastiness but I do want to discuss the latest step in their recovery.  Today officials at Penn State will introduce Bill O'Brien as their first new head football coach in nearly 50 years.  He will be responsible for rebuilding the football program and through that, the image of the school.  That will be one difficult job and it begins immediately.

Today, Bill O'Brien is still the offensive coordinator of the New England Patriots.  Because the Patriots are the #1 seed in the playoffs, Bill O'Brien has another challenging job - preparing and helping the Patriots offense, led by future Hall of Fame Quarterback Tom Brady, to compensate for their own pathetic defense, as they attempt to advance to another Super Bowl championship.

Bill O'Brien. One coach - two full time jobs.  Both teams need his immediate, undivided attention and won't get all that they need.  Given the dual roles, how do you feel about the Patriots' chances of another Super Bowl?  Given this conflict of interest, how do you feel about Penn State's ability to have a quality recruiting season?

This happens quite frequently in my world - the sales force.

In most small businesses, the President or owner is responsible for running the company and by default, manages the sales force too.  The problem?  Unskilled sales management is being provided on demand and that is always quite ineffective.

In companies that can afford one, the sales manager is often asked to maintain personal accounts and manage the sales force.  In scenarios like these, personal sales and, more specifically, the commissions earned, get most of the sales manager's attention and although we may see slightly more in the way of sales management skills, it is simply another example of on demand sales management and it doesn't work.

Dual Roles could be the single biggest common issue in companies that are trying to grow.  Dual roles don't work.  I'm proof!  I'm running two companies, still working with select personal clients and can't focus on any one of those roles for any extended period of time.  I'm fortunate when I can devote ONE ENTIRE DAY to a single one of those three roles. Most days my time, attention, effectiveness and results are so badly split up that it's a wonder everything gets done.

In most cases sales will suffer.  Dual role people lack the time to do sales justice so if a prospect is difficult to track down or slow to respond, they don't have the bandwidth that a full-time salesperson has to connect.  It might be a week or two before they have the chance to make a second attempt!

When people are in a dual role it is always sales that suffers.

Are you or any of your people in dual roles?  What is suffering?