The Myth of Sales Habits and Competencies

I get a kick out of the feedback we get from some veteran salespeople and sales managers after their first training sessions.

Here is what I think.

The training could not have reinforced the importance of anything because if they had already acknowledged that something was important, why weren't they doing it?

The training could not have reminded them to always do anything because if they had forgotten to always do something then they probably did not really know to do it in the first place.

The training may very well have provided more clarity on multiple topics but more clarity comes from not having much clarity or understanding to begin with.

If they realized that they had gotten out of the habit of doing anything, then did they really ever have a habit?  When something is a habit, one always does it and nothing would prevent it from getting done.  So it is far more likely that there was never, ever anything even close to resembling a habit.

So why do some veterans feel the need to provide feedback in this manner?

Could it be their egos?  Could it be that they are simply too embarrassed to admit that the material was either new to them, or they had rarely, if ever, used or implemented strategies and tactics like these before?

For instance, they have surely heard the importance of asking questions before.  But just as surely, they haven't been tought exactly how, when and where to ask in a simple, effective, non-threatening manner. They haven't been shown how long to continue the questioning, how to continue it, exactly what they are seeking to learn, when to stop, how to summarize, and how to turn the resulting urgency into a commitment to spend more money to do business with them.

Ego.  They simply can't admit that they didn't know. 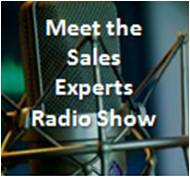 On today's episode of Meet the Sales Experts I'll have a panel of Sales Development Experts talking about some of the recent popular posts on the four blogs hosted right here.

Ego of the Sales Leaders (I'm a Sales Guy!)

Listen to us live at 12 Noon ET and, if you have a question you would like answered on the show, send it to me right now or during the show via email.