Maybe you drink the finest wines, stay at the most luxurious hotels, dine at the best restaurants, purchase the best brands and drive the fanciest cars. Or not.  Either way, you'll at least want to know where you can find the best salespeople in the world, right?

To accomplish this I looked at data from the most recent 435,000 sales evaluations and assessments from Objective Management Group (OMG) and broke it down into 6 regions of the world. See the image below.

Breaking it down a little further using the same criteria, the USA comes out on top in North America and within the USA, Colorado has the most elite salespeople and Alaska has the largest percentage of weak salespeople.  You can look at some of this data on our public site and see how salespeople score in all 21 Sales Core Competencies.

The important lesson from this is that even in the land of great salespeople, most are still very weak while in the land of horrible salespeople you can still find the occasional strong ones.  Resumes from strong and weak salespeople are nearly indistinguishable and in an interview a weak salesperson might even be better at getting you to like her than a strong salesperson.  The challenge for most then, is how can you tell the great salespeople from the weak ones?  It's pretty easy if you use the most accurate and predictive sales candidate assessment on the planet. 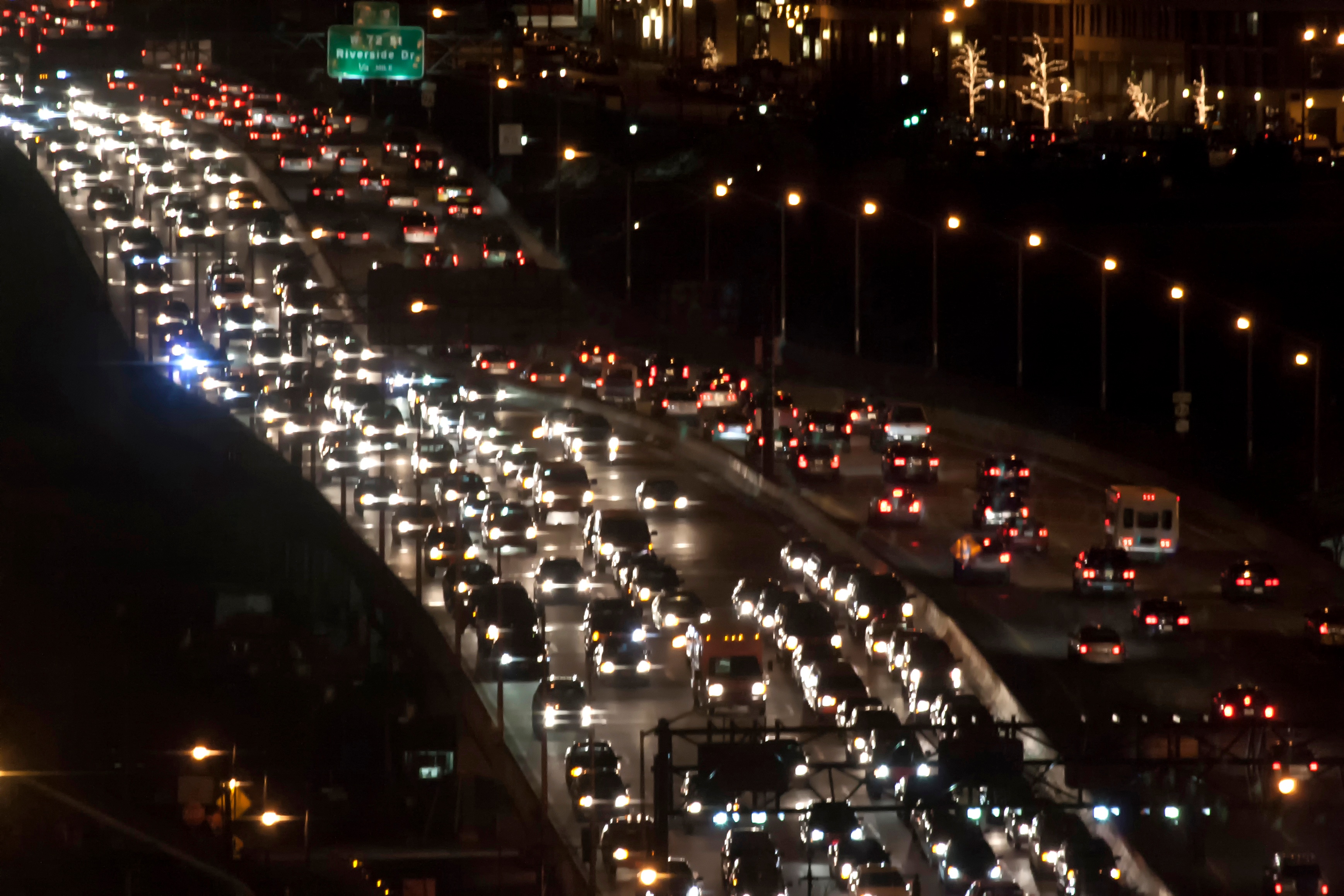 Over the past 3 months, my wife and I have been up and down the east coast driving our son to and from baseball tournaments and college showcases.  Invariably, each drive back home has taken twice the time it should have because of road construction.  On Sunday, Waze, my favorite navigation app, said that the drive would take just 2 hours and 32 minutes. 4 traffic delays because of road construction delayed us for another 2 and 1/2 hours.  Delays, delays, delays.  Nearly every coaching call with a salesperson is about a delayed closing.  Nearly every coaching call with a sales manager is about a salesperson with a delayed closing.  Everyone wants to know what to do about the delayed closing but that's the wrong question.  Everyone should be asking these two questions instead.

When I begin working with companies, most delayed closings are simply a case of the salesperson and sales manager deciding that the opportunity was closable and would close on a certain date.  This assertion was most often made up out of thin air with little to no facts to back it up.  Upon further inspection it was clear that these were not closable opportunities so the delays were not based in reality.

How can we prevent delayed closings?  I will list the 12 most important factors for preventing delays at closing time along with some links that further explain what I mean, how to do it more effectively, and/or provide statistics.  Please keep in mind that the list of factors is not a menu.  You can't choose the factor that seems easiest enough to fix and believe that anything will change.  You must fix all of them!  For example, suppose you need to loose 30 pounds, and are told to avoid breads, pastas, processed foods, snacks and pastries. If you decide to eliminate only bread, not much will change.  However, if you eliminate all of the processed foods the weight will come off quickly and easily.  The same is true with selling.  If you fix all 12 of the factors below, you will not only shorten your sales cycle, you will quickly and easily improve your win rate too.  Here they are:

You probably noticed at least 3 common factors missing from the list above:

Customers Love to Buy - Why Do Salespeople Struggle? 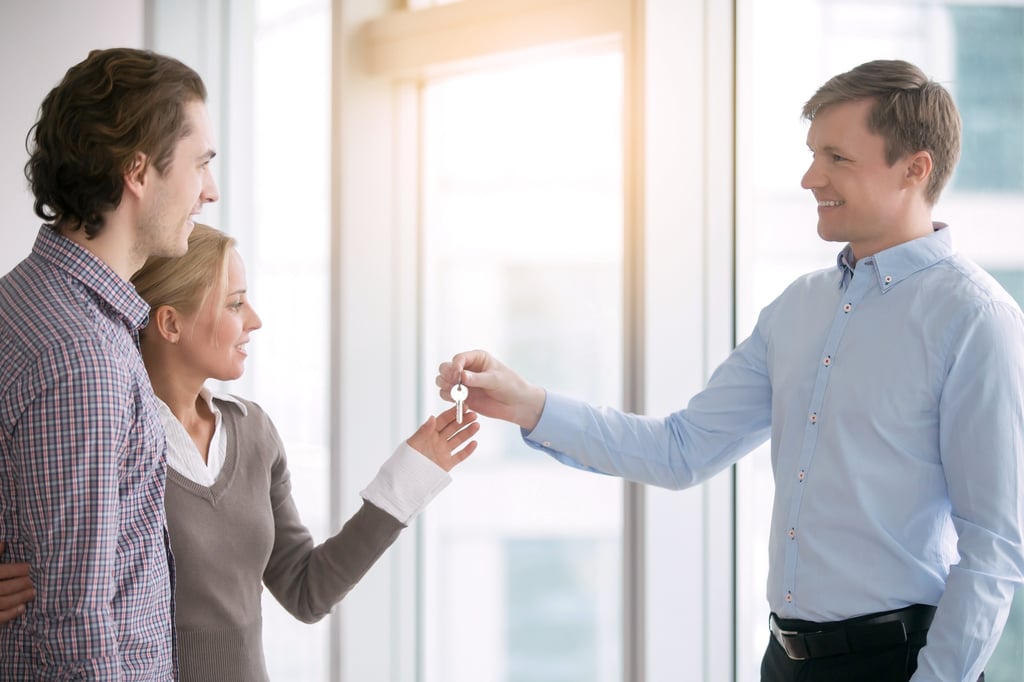 I just returned from the local car dealer.

Have you ever noticed how happy people are when they are buying things?  What about you?  How did you feel the last time you took delivery of your new car?  Was it the new car smell?  The finish?  The wheels?  The look?  The brand?  What about the last time you bought a new smartphone, tablet or notebook computer?  And how happy were you when you moved into your house or apartment?  When you installed the swimming pool, bought the boat, renovated the kitchen, painted the house, bought new furniture, the flat screen TV, or a new wardrobe?  Happy buying extends to vacations and even sporting goods.  It never ends!  The excitement from these purchases tends to last much longer than the moments themselves.

So if we all love buying stuff, why do salespeople struggle so much when they try to sell stuff?  Why isn't it as friction-free as an abundance of happy buyers would suggest it should be?

There are at least 13 reasons for this:

There are more reasons but I'm equally sure you get the gist of this.  How can you make the B2B experience more pleasant, helpful, personal and value-based and less about your goals and needs, which raise resistance?

How Boomers and Millennials Differ in Sales 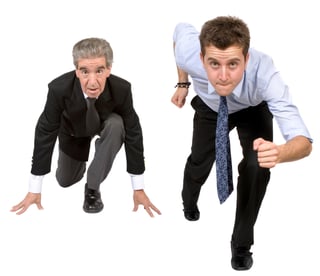 I hate this article already - the last thing we need is another article to help us to understand Millennials.  Except for one thing.  Most of you reading this are Millennials and you probably need to better understand boomers.

We can begin with Motivation.  Boomer salespeople are generally extrinsically motivated - motivated by money and things - while Millennials are typically intrinsically motivated.  They would prefer to love what they do and strive for mastery.  Here is more on the difference between these two types of motivation in sales.

We can talk about New Business Development too.  Boomers are much more likely to pick up the phone and make a call - even a cold call - to initiate contact and follow up and they prefer to meet face-to-face.  Millennials are more likely to use their social networks - LinkedIn, Twitter, Text and Facebook - to initiate contact - and email to follow-up and they tend to prefer selling by phone.  The two newest selling roles - SDR's and BDR's - are both top-of-the-funnel roles where the reps simply schedule meetings and calls for account executives.  These roles are filled almost exclusively by Millennials.  I hear you.  "But they are on the phone and you said they don't like using the phone!"  Exactly.  And that explains why they are so bad at it. The latest statistics from ConnectAndSell tell us that these reps book, on average, 1.5 meetings per week.  If that is the only thing they are required to do, shouldn't the number be more like 2-3 meetings per day?

And speaking of Selling Skills, Boomers are far more likely to have professional selling skills while Millennials are more likely to frame selling in the context of demos, proposals and follow-up.  It might not be their fault, as most of them are in the aforementioned top-of-the-funnel roles, while Boomers are almost always found in outside territory, major account, vertical or account management roles.

One of the new things that Objective Management Group (OMG) introduced last month is industry statistics where the results of a company's sales force evaluation are compared against other companies in their industry.  Here's an image from a slide that looks at the average scores for salespeople in 6 major strands of Sales DNA and how this sales force (burgundy) compares to similar companies (blue) as well as all companies (green). 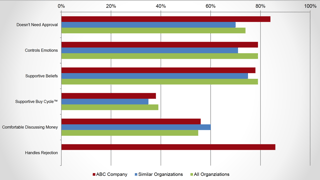 Regular readers know that OMG has evaluated salespeople from companies.  I am hoping that in the coming months, we can filter our data by generation and share the differences in the 21 Sales Core Competencies that we measure.

Sales and Selling - Which Has Evolved More?

Which do you think has evolved more?  After all, both have been around since there has been anything to sell.

Selling was fairly late to evolve.  A formal sales process didn't exist before the middle of the 20th century and I can make two points about AIDA  - the first of its kind.  AIDA was an acronym for Attention, Interest, Desire, Action.

There isn't much evidence that sales experts existed prior to Elmer Wheeler in 1936.  If you haven't read my book, Baseline Selling, then you probably don't know that Elmer invented two concepts that are well-known today.

Selling evolved more later in the 20th century and into the 21st century with more systems, processes, styles and today, tools and applications.  However, I was recently looking at the data to see two things. How salespeople had evolved or adapted looking at two points in time:

What I found amazed me and will surely amaze you.  Ready? Salespeople have not changed in any way since the recession.  The statistics are identical with one exception - the percentage of salespeople who are hitting their numbers has declined significantly.  However, the skill sets have not improved despite the need for them to.  And the weaknesses are just as plentiful as they were, despite the need for them to be overcome.

Surely, when I compare today's data with the data from 20 years ago, there is change, right?  Wrong.  Same findings.

What do you think?

This is why it's so important to work with a sales development expert - someone who takes an integrated, thoughtful approach to the sales force.

There are at least as many more reasons but this article is already longer than it should be.  We'll just call it part 1 and I'll circle back with part 2 at a later date.