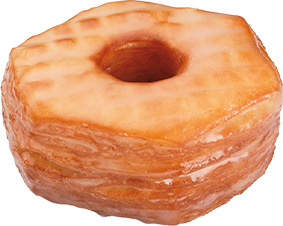 This afternoon, my willpower finally cracked.  On Monday, just before lunchtime, Dunkin Donuts sent me an email with an enticing picture of their new croissant donut, with the catch "we only make a limited number per day" followed by the challenge "get runnin'" (which ironically is also my penance for eating such a delicacy).  After two earlier coffee runs where the "limited number" had already been sold, today I looked across the glistening counters of my favorite (or perhaps simply most convenient) coffee shop to behold a nearly-full rack of croissant donuts.  "I'll try one of those," I said, trying not to sound too excited.  It's at this moment that I was introduced to the worst salesperson I have ever met.

Perhaps I exaggerate.  I have met lots of bad salespeople, and this young lady (let's call her Molly) isn't in a role that would generally be considered "sales," but since she was selling me something I'll argue that we can apply the same principles.  I should explain that the croissant donut is so special that it has a very special price -- about 2.5 times the cost of a regular donut.  Usually when I get a donut, it gets tossed in a brown paper bag.  This was different.  Molly had to assemble a tiny box specially made for my treat.  As she unfolded and tucked the intricate puzzle of cardboard flaps, she smiled and said to me "It comes in its own box. That's why you pay more."  My first inclination was to discount this as idle chit-chat, but something was bugging me.  Why did Molly bring up price?  Sure, this thing was overpriced.  She knew it.  I knew it.  But I hadn't complained about price.  Odd, I thought.  My pensive look must have made Molly uncomfortable, because then she said to me "If you knew what they really cost, it'd make you sick."  "What?" I said.  I heard her; I wasn't actually asking her to repeat herself.  Rather, I was exclaiming my disbelief in what she said.  She repeated the same statement again.  "Thanks," I said, laughing awkwardly, and I was on my way, shamefully attempting to hide my special box beneath some napkins.

As I walked back to the office, I thought about my conversation with Molly.  Before I started working with Objective Management Group (OMG), I would have just written this off as a mildly humorous interaction.  Today, however, I thought of Molly from the perspective of a salesperson.  One of the things that sets OMG's assessments apart is our ability to uncover sales-specific findings, many of which wouldn't be discovered during an interview, when other factors such as likeability can stymie objectivity.  One of these findings is money tolerance -- how comfortable salespeople are discussing money and dealing with relatively large sums of money in their personal lives.  Paying $2.49 for a pastry clearly made Molly uncomfortable, and she was dealing with that discomfort by bringing up the topic of price with me.  She was trying to handle an objection that I never even objected to.  Additionally, Molly displayed another finding -- Need for Approval -- wanting the customer to like her.  When salespeople are focused on getting customers to like them, they fail to fully understand the customer's needs and deliver value because they are too busy focusing on themselves and their relationship with the customer.  Both money weaknesses and need for approval are part of Sales DNA -- the core beliefs and strengths that a salesperson possesses which either support or sabotage sales success.

So as I sat at my desk, shamefully devouring my delicious treat, I laughed to myself.  I know that Molly isn't a salesperson in the truest sense, and she was very personable, smiled, and truly delivered great customer service.  But clearly, I realized, being part of the team performing some of the most exciting and in-depth sales research in the industry has changed me.  All I could think was "Wow she's a really bad salesperson!"

Want to learn more about the hidden weaknesses that our tools can uncover?  Take our free trial for a spin, download our samples, or check out our whitepapers!