Commitment and the Data Behind Sales Trainability 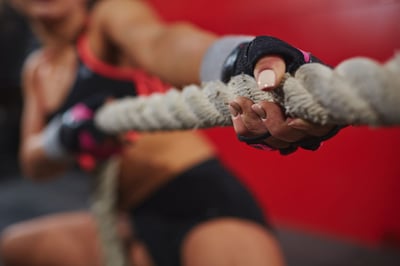 It's a startling statistic that 37% of salespeople lack the necessary Commitment to their sales success to make significant improvements in response to training. In an article posted a few weeks ago, I discussed the 7 Sales Training Success Factors and how to avoid sales training failure. If you missed it, you may read that article here. After several thousand views and numerous responses, both from comments in social media and personal notes, it's clear you want even more detail on this very important issue. I'll address one of those factors in more depth today and get to the others in future articles. Factor number 3 of the 7 was A Trainable Sales Force. So what makes a salesperson trainable?

The statistic mentioned above is important to know when setting up a sales training program. It was drawn from the vast trove of data collected by Objective Management Group over the past two decades. This specific finding came from sampling 44,000 recent evaluations of currently-employed salespeople. It's showing that almost 4 out of every 10 salespeople have this issue! It might explain what you are seeing at your own company. How many of your salespeople are making steady improvements in their skills and effectiveness? How many are stagnant?

In the context of training, let's take a wider look at the characteristics that play an important role in yielding the most successful outcomes. First, what does it mean to say that someone lacks the "necessary commitment?" Commitment can be defined as the level of discomfort one is willing to endure to achieve what she or he desires. In short, desire is what we want; commitment is what we are willing to do to get it.

Often, managers use a few rules-of-thumb to determine if a salesperson is going to "make it." I usually hear things like, "they gotta love selling,"  or, "they gotta be hungry," or "they gotta know our industry." While these can be useful, the reason some of us use them, and others like them, is because they are relatively easy to determine about a person, without a comprehensive assessment. When we short-cut the selection process like this, we are guilty of what psychologist Daniel Kahneman calls the Availability Heuristic. We are prone to favor readily available information and we have a tendency to over-weigh the implications of a finding we can easily determine.

Commitment is just one of the 21 sales core competencies that we look at when evaluating salespeople for training or, for that matter, when making a prediction about how successful a sales candidate would be at your company selling your products and services to your customers in your market against your competition. When we connect all of the dots, the picture of the salesperson emerges and that complete picture makes it much easier to predict if they'll be successful. Any one data point is just a dot. Love selling?; dot. Hungry?; dot. Committed?; also a dot. Before I recommend hiring a salesperson, I might look at those first two dots, for example, to help me make a decision but they are not one of the 21 sales core competencies. They are not as important as Commitment - a more important dot.

It turns out, Commitment is one of the most difficult findings to tease out of a candidate. If you ask someone during an interview if they're committed to their success, they'll say "yes." That doesn't help you because who is going to say, "no." Rather, we need to understand that level of discomfort they will endure to be successful in selling (or in their sales managerial role) as they define that success. An evaluation is the simplest, most objective way to find out. A lack of commitment usually leads to the following set of outcomes:

When hiring a candidate or moving someone into a role in which they lack commitment, it eventually leads to regret. If they lack other critical skills required for the role, then the lack of commitment usually results to failure in less than six months. If they have most of the skills they need for the role, a common scenario that understandably presents the greatest challenge for hiring managers who convince themselves that the low-commitment finding is an aberration, what generally happens is the performance over time is lackluster relative to their skills. In this scenario, regret sets in at between 12 and 18 months at the realization that you've lost a year and a half and have to start over.

And what if their Desire for sales success isn't very high? That's another dot that is also very important in the picture that emerges from all those dots as it relates to their trainability. In that same data sample, 13% of sales "current-employees" lacked enough desire for success in sales to justify making the necessary effort to improve, or roughly one in eight. It's an interesting statistic if not quite as alarming as the two out of every five who lack Commitment.

While the percentages of those who don't have each of these characteristics, or necessary grit for selling, is higher than you might expect, remember that each of these factors is a dot. Taken together, generally about 75% of the team is trainable. The impact on revenue from the improvements that those 75% can make in a year usually far outweighs the lack of results that will come from those who are less willing to improve. And when you know who is who, sales leaders can choose to make improvements by looking at three groups that emerge:

For maximum improvement to performance, leaders can train group 1 and choose to replace group 3 with people who are stronger than those in group 1. The group 2 people present a potential dilemma. Generally, it's best to look at both the level of their performance, and the growth requirements and ask yourself if you can afford to let them continue to beat quota quarter after quarter without a year-over-year growth.

A team with 75% trainable salespeople are commonly able to produce between a 25% and 75% growth on their improvement alone, without even replacing group 3. For sales training to be successful, it helps when the sales force is trainable. Last fall, I evaluated a team that came up short, resulting in a rare recommendation not to spend money training the group. It wasn't going to work. We took a completely different approach that I'll share with you over the phone if you're interested and/or concerned about your team.

For the individual salesperson, commitment is at the heart of their trainability and willingness to make the changes required for their own improvement so they can achieve the success they desire. How committed are you to ensuring your team makes the improvements it needs to meet or exceeds the outputs that you desire for them?