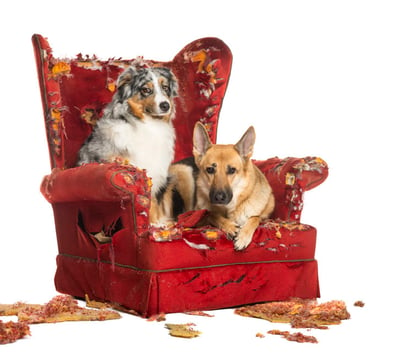 It's a new year. "Don't train your sales force!" As strange as that sounds, it might surprise you how often this was my recommendation to business leaders looking for help last year for their sales organizations. But please don't misunderstand. Unless your sales force has a full pipeline, accurate forecasts, high closing ratios, improving margins, consistent revenue growth, and meets budget every quarter, they might need training. But that doesn't mean you should get them trained. For sales training to be effective, the conditions must support it, or it isn't worth the investment. Without knowing the underlying causes, the training could be indiscriminate and ineffective.

Recently, I posted an article listing the 7 Success Factors that support sales training. If interested, read it here. Today, we'll address number 4, below: Trainable and coachable sales managers. After all, why should it matter? If the manager is on her game, knows how to sell, and operates autonomously, is it really necessary that she be coachable and trainable, too? C'mon! Here's why.

Number 4 is that sales managers themselves must be trainable and coachable. Mining the data from 1.8 million assessments of both salespeople and sales managers evaluated by Objective Management Group, we know that 22% of managers are uncoachable and 28% are untrainable. That means that almost one in four won't be able to make the changes necessary to improve their skills

Among many of the conditions or environment that support training success are the willingness and ability of sales management to support and reinforce the training to ensure that it sticks and that the team improves. It isn't always simply a matter of needing to make improvements, but rather it's having an organization structured and ready to capitalize on those improvements.

Most managers are interested in developing their skills further in important sales management areas such as motivation, coaching, recruiting, and holding people accountable. Understanding the common areas where sales management gets in their own way is a good start to mastering number 4, above, and clearing the way to effective sales training.

How sales management gets in the way:

Sales management is a full-time job. Sales managers must desire success in the role and be committed to doing what it takes to be effective in the role. If they are not coachable or if they are not trainable, or both, they will not be able to improve and will have a difficult time cultivating an environment that supports learning and improvement among their team.

Because there is often confusion with two important terms above, I have illustrated the difference between Untrainable and Uncoachable using pictures: 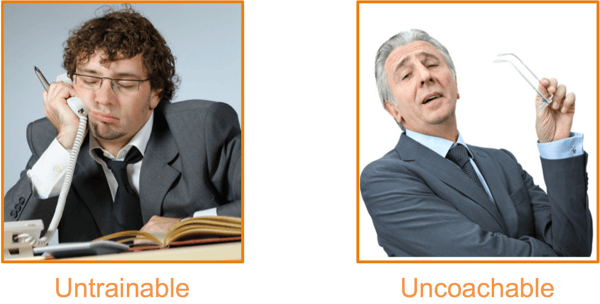 Untrainable people lack the desire to succeed. They won't try to improve. Uncoachable people might or might not be trainable - they are independent. The uncoachable cannot imagine that you or anyone else could help them perform better. They already know everything. If they are right and they do know everything, that's great until you try to implement a change. If they don't already know everything but think they do, or if they are no longer interested in improving in their role, welcome to a world of frustration for company leaders. And for goodness sake, don't train the sales team. Yet.

If you would like to know how your managers measure up in these important areas, click here.

To understand corporate politics in sales is to understand the shifting intensities of resistance. My most recent previous article argued that it’s important to clear a path through the thick brush and brambles of your prospect’s company politics by retaining your courage to do what it takes to get to the right audience. 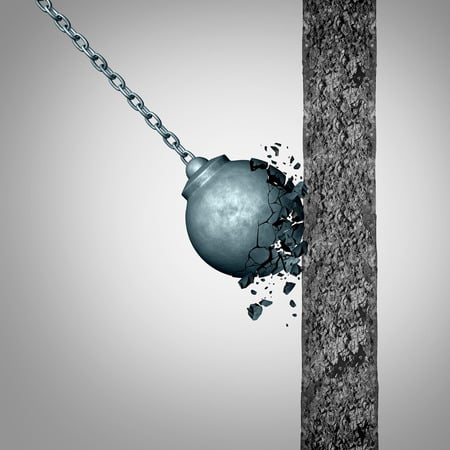 One reason why it’s necessary to master corporate politics in a selling context is that there will always be divides in thinking, due in part to sincere differences in understanding on what’s best for the business, and due in part to plain old self interest. And whether we're talking about reaching the lone business owner or the key procurement coordinator at a large company, how we overcome resistance will determine our outcome.

Your products and services might appeal to one group of stakeholders at a company, and at the same time seem unnecessary or even detrimental to another individual or faction within the company. In the first scenario, where there is appeal for your products and services, resistance is low. When resistance is low, your words and actions are interpreted in the best light and minor mistakes are given a pass. With the second group, however, the resistance is high. Everything you say and do is viewed with suspicion. Minor mistakes are magnified in an I-told-you-so kind of way.

There is virtually no way to close a sale when resistance is high. When you encounter high resistance, your first order of business is always to lower it. Watch Dave Kurlan explain how to do that in this short video. As you improve your ability to sell to businesses through their political underbrush, it is imperative to learn how to manage resistance. Sometimes, flipping just one detractor to an ally might be the key that closes the sale. So let’s talk about resistance in the context of corporate politics. Here are my top-seven most common scenarios:

Today, we are only addressing the first one. Stay tuned for future articles covering the remaining scenarios, which you will want to print out and keep with you so that the next time one of your salespeople has one of these issues, you’re ready!

1. The Resistant Purchaser
This is the most common resistance scenario and can happen at any point along the path of your sales process. At the beginning, it is resistance to meet with you. In the middle or near the end, the resistance is against continuing the discussion or returning your phone calls.

If you’re getting resistance to meet, work on your positioning statements – not your elevator pitch. The positioning statement is about whom you help and why they need your help. The elevator pitch, as described by most people who describe such things, adds a part about how you help them. Leave that out. The “how” part shouldn’t matter this early in the sales process and often only serves to increase resistance.

If you’re getting resistance in the middle, then you have lost their interest and while you may have distracted them from their mental to-do list momentarily with your exciting positioning statement, they now think they already get it and don't need it. As sales Hall-of-Famer Dave Kurlan often reminds us, while the science of selling is following the correct process, the art of selling is managing resistance, both raising it and lowering it when appropriate.

If we get near to the end of the sales process and we suddenly find resistance, or you find the floor disappearing under you feet exposing a swimming pool with live sharks and all you have is a tiny air tank in the shape of a pen that Q gave you, now you’ve really messed it up! The prospect, somewhere along the way lost interest, or wasn’t heard, or wasn’t understood, and the presented solution doesn’t match up with what really matters to them.

Now, I welcome comments below, and I realize the above might offend some salespeople who might be reading this thinking I’m blaming you, so I will say that it could also be that the company changed priorities, or the purchaser moved to another department, or their phone system went down for weeks and they couldn't call for help because they didn’t have any phones. However, since we don’t have any control over that, let’s work with something within our control and for that matter, let’s make it even more within our control by taking full responsibility for it. Let’s go ahead and blame ourselves. So now that we own the problem, we can own the solution.

When the prospect gets resistant at the end of the sales process, if you’re still talking, it often sounds like an objection, in which case, click here to view the same video link as above where Dave sheds new light on an old term. Lower resistance by agreeing with your prospects concerns and objections. Then ask questions about what they are thinking and feeling, why they think or feel that way, and let them tell you as much as they are willing. When they have said all they want to say about it, ask them what has to happen that would make them want to hear about alternative solutions.

If it’s because they won’t return your calls, it might be due to what I just described about a mismatch between perceived solution and described problem. This is of course more challenging because if you can’t speak to someone, it’s hard to lower anyone’s resistance. Somewhere along the path of your sales process, we might have failed to find the compelling reasons for doing business. It could be because we didn’t ask enough questions, we didn't ask good questions, or we didn’t ask the hard questions. Maybe we didn’t have enough rapport to ask them, or maybe we weren’t listening, or maybe we did everything right and our prospect either changed their mind or were lying to us in the first place.

In this case, it’s important to try to get them back engaged and when you do, don’t try to sell them even harder, making the false assumption that your last pitch just wasn’t good enough. They don’t want that. Instead, take them back to the beginning. It might sound something like this, “When we first spoke, it sounded like you had a problem in procurement so that every time you were in a pickle, you were almost always out of dilithium crystals right when you needed them most. Is that still a problem?” And then follow up with something like, “Do you still want help? Should we keep talking?” Etc.

The Other Six Most Common Resistance Scenarios in Sales
Stay tuned to this blog by keeping an eye out for the email, or by subscribing in the box to the left so I can deliver the articles right to your inbox. I will address each of these common resistance scenarios in these upcoming articles. You won’t want to miss how I recommend dealing with The Resistant Faction when I give you the same advice my friend received from the chief of police in Guangzhou, China after a group of thugs stole the air conditioners from their corporate headquarters in broad daylight.

And one more thing: If you have a sales team, or sales teams, and want to become an elite sales coach, or you want someone who works for you to become an elite sales coach while learning the most state-of-the-art sales management skills, come to our Sales Leadership Intensive on May 22nd and 23rd in the Boston area. The class is kept at the optimal size to ensure both lively discussion and personal attention as we learn about your business and show you how to get the most output from your people with nothing but the power vested in you by the executive team. As I write this (2/18/18), we have six seats left. Because you read my blog, click on this link to register for the event and receive a $100 discount.