Every Mac owner knows about the dreaded beach ball of death.  For those who have never experienced the Mac equivalent of a computer crash, a beach ball that won't stop spinning appears on the screen and when it's more than a simple application crash, the death reference implies impending doom to the Mac itself.  This is what it looks like:

During the summer, beach balls can also be seen floating among fans in the center field bleachers at Fenway Park. This is especially true when the Red Sox are losing or playing a particularly boring game.  Death quickly comes to those beach balls when players, security guards or grounds crew stab the beach balls with a bullpen rake! 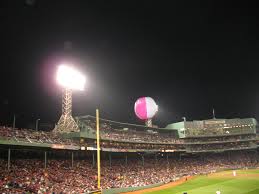 Last week I saw it for the first time on a slide from a deck that Objective Management Group (OMG) prepares when we evaluate a sales force.  This particular slide answered the question, "Why Aren't We Generating More New Business?" 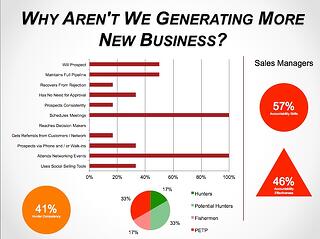 Do you see the beach ball at the bottom in the center of the slide?  If it was all green, that would mean that the salespeople would be capable of finding new business and building a better pipeline.  But it is far from being all green.  There is a lot of red and coral, suggesting that there is an even bigger problem than anything that a change in behavior, strategy or tactics might solve.  Let's take a closer look at that beach ball and the legend that accompanies it:

That big red area tells us that 33% of their salespeople are classified as People for the Ethical Treatment of Prospects (PETP).  Like their friends at PETA, who protect animals, the members of this group have a strain in their Sales DNA that prevents them from hunting prospects for new business.  In addition, the coral area tells us that 17% are fishermen.  They won't hunt either, but if a prospect bites, they'll reel in the opportunity.  The most a company could hope for is that the coral group of salespeople will follow up on leads.  The light green is represented by another 33% who will prospect if only a sales manager would hold them accountable.  But if you scroll up and look at the right-hand side of the slide, you'll see that sales management's ability to hold their salespeople accountable also falls into the red.  When all is said and done with this question about finding new business, only 17% of their salespeople will voluntarily go out on hunting expeditions.

As presently constituted, their ability to find new business is extremely limited - a sales growth beach ball of impending doom.

This slide represented only one of more than two-dozen difficult business questions that we answer where we use science to explain why companies get the results they get, whether or not the sales force is capable of improving their results, and to what degree those results can be improved.  Are you interested in learning more about a sales force evaluation?