Breaking News - More Salespeople Suck Than Ever Before (and Why)

Saturday evening, I was driving my car and listening to the radio when a song played that I hadn't heard since the 70's.  It occurred to me that long before the advent of rap music, Charlie Daniels must have been the accidental originator of rap with his song, The Devil Went Down to Georgia.  If you are too young to have heard it, don't remember it, or just want to hear this white country boy do his thing, watch this awesome YouTube clip.

Thinking of rap got me to thinking of salespeople - who always get a bad rap - and that got me to thinking about Bad Company, and their song, Taking Care of Business.  The only problem with my thinking is that Bad Company didn't record that song; Bachman Turner Overdrive (BTO) did as you can see in this YouTube clip recorded at a prison!  If you're like me, you must be wondering where this post is heading...

Salespeople always seem to get a bad rap and obviously that's bad for business. But it's always been that way and nobody has made a very big deal about it, so what has changed? This article details all of the things that have dramatically changed modern selling in just the past several years.  And this article explains why millions of salespeople will lose their jobs and become obsolete.
Objective Management Group (OMG) has evaluated and assessed salespeople and while selling has changed and evolved, the data shows that one thing hasn't changed at all.  The following graph shows sales capabilities as measured by OMG's Sales Quotient and how that has changed in the past 15 years. 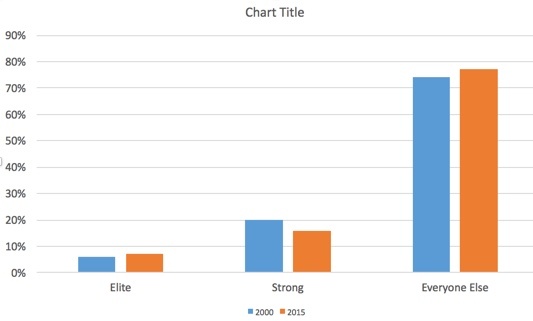 For years, I've been writing that there is an elite 6%, another 20% that are fairly strong, and then the remaining 74% suck.  Well, those numbers have moved.  As you can see in the graph above, the percentage of elite salespeople has climbed by a whopping 1% to 7%, or an increase of 10,000 salespeople.  Unfortunately, the decrease in strong salespeople, from 20% down to 16%, means that the percentage of sucky salespeople now stands at an unbelievable 77%.
So despite the glut of free content in the form of blog articles, podcasts and videos, how do we explain that sales capabilities on the whole are worse than ever before?  Going back to Charlie Daniels and BTO, the devil may be in Georgia, but he is definitely right here in the details where it is obvious that we aren't doing a great job of taking care of business.
When a change in the way that people buy is taking place at a faster rate than a change in the way that people sell, we see results like these.  Richardson just published their 2016 Selling Challenges Report.  I typically don't care for surveys - especially those with a small sample size like this one, and those whose respondents are primarily from large companies. But in this case, the findings are correct; especially the top 3 issues that salespeople are struggling with:

The 3 topics are identical to those I write about most frequently because they correlate to the issues we uncover when we evaluate sales forces.  Why are salespeople struggling so much with these issues?

Today, if salespeople do not learn to master the consultative approach, a prerequisite for Value Selling, they won't be able to differentiate themselves in the field.  Without differentiation strongly grounded in value, buyers will ultimately make their decisions based on price.