Did You Know That There is a Season for Hiring Salespeople?

I live in the Boston area and there are some things that I know will always be true about the seasons.  School buses start rolling in September, fall foliage peaks in October, the first freezing cold days arrive in late November, snow storms are routine by mid-December, the coldest, driest days are in January, the snowiest month is in February, the days begin to get longer in March, the snow has melted so that baseball can be played in April, flowers blossom and leaves appear on the trees in May, summer weather arrives for good in mid-June, it turns as hot as the fireworks in July and the weeds thrive and attempt to choke out the plants in August.

Did you know that when it comes to hiring salespeople, there are also seasonal trends we know to be true ?

It's as certain as the ice storm we seem to get every year right around the New Year.  The first graph below is a running total of the number of sales candidates assessed since 2009.  Beyond the obvious trend towards more, which has more to do with Objective Management Group (OMG) than hiring, you should be able to notice the many peaks and valleys.

If we look at the same data in a different way, those peaks and valleys will make more sense.  In the next graph we separated the data by year (the different colors represent the years 2009 - 2015) and month (1-12). If you look closely, you can see that March and October are the seasons for hiring salespeople!  You can also see a few other things that are reflective of conditions in the economy.  Note how the peaks did not occur in 2010, because the economic recovery had not yet kicked in. And note how with the exception of March, the number of candidates is down in 2015.  This is not about OMG, but it is about the current shortage of sales candidates. 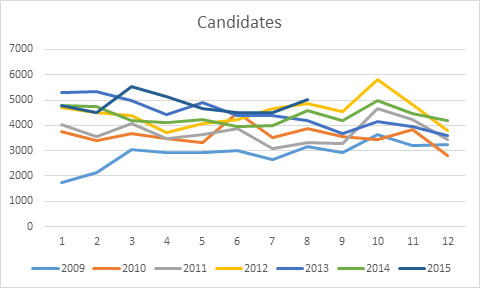 On first blush, it's easy to mistakenly believe that more candidates are looking to change jobs during March and October.  But the reality is that more companies hire salespeople in the last first and last quarters. How do I know?  OMG has an uptick in licenses and subscriptions sold during March and October.  So, if we are closing in on October and most companies hire salespeople in October, shouldn't you be thinking about doing that too?

What's that?  You don't need any salespeople? Are you sure?  When 50% of salespeople don't make quota and 30% of salespeople can't be trained, some simple math would suggest that 15% of your sales force should be replaced each year. Perhaps it's time to replace your worst performer(s).

It's also important to see that you will have less competition for those candidates if you hire in July, September, and the Winter months.

If you don't already use OMG to get sales selection right, this would be a great time to start!  Plans start at just $99 per month and you can use this link to learn more and subscribe.