As you know, I'm a baseball guy.  I wrote the best-selling book that merged baseball and selling, my son is a ranked high school catcher and I use baseball analogies in many of my articles.  With apologies to soccer, hockey, football, basketball and golf fans, no sport is more analogous to selling than baseball.

Before we get to sales and the data, let's take a quick dive into the most important skill position in baseball, pitching.  Even that's a sales word!  Pitchers don't have to throw hard if they have great control and effectively and consistently locate their pitches.  Hard throwers don't need to be as precise as long as they have a second and third pitch to keep the hitters off balance.  Pitchers who throw hard, locate their pitches and have a 4-pitch mix are elite.

One group of special pitchers are the closers.  They typically enter games in the 9th inning, throw hard and close out the game.  For example, Craig Kimbrel, the Boston Red Sox closer, has been such a guy.  Entering play on August 14, 2018, he has appeared in 49 games, pitched 49 innings, has amassed an amazing 75 strikeouts and has saved 35 games in 39 chances.  At the other end of the spectrum, less effective pitchers usually fail in the closer role because they don't dominate the hitters.

Pivot to sales.  Elite salespeople don't need to close and weak salespeople suck at closing.  Want proof?  Let's review some data from 1831605 evaluations and assessments of salespeople conducted by Objective Management Group (OMG).  You can see and play with the data here. 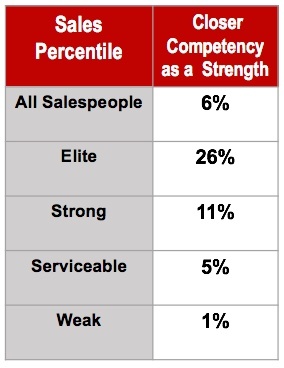 The data also proves that the remaining 75% of salespeople who are serviceable or weak and also ineffective at most of the 7 Sales Core Competencies that precede closing, can't close even when they try!  Closing is so overrated!