Most salespeople know the importance of establishing trust and sometimes overcompensate to achieve it.  However, when salespeople lose credibility, the most likely scenario is for their prospects to buy from someone else and this happens much more often than you might think.  Data from Objective Management Group's (OMG) evaluations and assessments of 2,055,661 salespeople tell us that only 38% of all salespeople establish trust and even the top 5% are only able to bump that number to 54%. 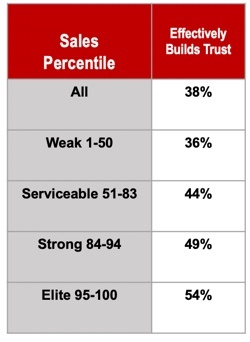 Your prospects will usually be on one side of your argument or the other.  There's not really any such thing as down the middle because everyone has an opinion.  Whether it's your approach to solutions, product design, services, technology, pricing, timing, delivery or customer service, you won't be credible if you take the view that is opposite of what they believe.  Period.  CNN is the most trusted name in news - as long as you agree with their 24x7 anti-Trump narrative.  FOX is fair and balanced - as long as you only watch the three shows that are actually fair and balanced; because the others definitely lean to the right of center.