How to Prepare for the Coming Sales Team Super Storm What would you do if, in the middle of summer, a big box store said you would really need a snowblower in preparation for the summer snowstorms we were about to get?  Crazy, right?

What if Staples sent out a promo to buy all the printer paper you can in preparation for a printing explosion as we move away from digital?  Wouldn't that be nuts?

So when a promotion for an upcoming webinar appeared in my Twitter feed last week I was equally astounded by the lack of anticipatory awareness of the sales training firm and online publication promoting it.  It said:

My first reaction was that this must have been something from 2016 - right before the boom that lasted until the pandemic slammed the economy to the ground.  Or, from the 4th quarter of 2020, when we expected the economy to come roaring back.  But it simply can't be something that is remotely relevant to what we are about to experience.  Here's what we know, and how that will impact companies and their sales teams in 2022.

I'm not an economist, but I can read, seek out trustworthy sources, and have 46 years of business experience. On top of that I am street smart, have good common sense and  can do the math.

Inflation.  According to Trading Economics, the current inflation rate is running at over 5% compared to 1.2% just a year ago.  That is bound to lead to higher interest rates and a drop in consumer confidence, followed by layoffs, spending freezes and more price increases.

Federal Debt.  According to Statista, the federal debt is over 28 trillion dollars, more than four times what it was 20 years ago.  On top of that, Congress is debating on two bills, which together, would add another 5 trillion dollars to the debt. Regardless of what anyone in the US government says, it can only lead to higher taxes. One of the bills being debated right now has provisions for significant tax hikes.  According to the NY Times, the corporate tax rate could increase by more than 30% and the rate for the wealthiest Americans could double! According to Tax Policy Center, senior fellow, Howard Gleckman, "95% of all federal taxes are paid by households in the top two quintiles — those making about $98,000 or more."

No matter how you cut it, higher taxes lead to layoffs and spending freezes. The wealthy will have less disposable income to inject into the economy and the businesses they run must layoff staff to compensate for profits being redirected to pay additional corporate income taxes.

Don't get me wrong. If multi-billion dollar companies aren't paying any taxes they should pay their share but this won't affect them.  According to the US Treasury, 30 million SMEs account for nearly two-thirds of net new private sector jobs. This will affect them and their employees.

Immigration.  You don't have to live in a cave to see what's happening on the southern border and with the Afghanistan immigrants.  Millions of people streaming into the US means millions more low wage workers.  According to George Borjas, professor of Economics at Harvard University, "Immigration redistributes wealth from those who compete with immigrants to those who use immigrants—from the employee to the employer."

As wages go down, disposable income vanishes and that negatively impacts the economy.

Stock Market.  Wall Street has the jitters right now because they don't like what they are seeing.  According to Morgan Stanley's Chief Investment Officer, Mike Wilson, stocks could be in for a 20% correction.

According to BTIG's Juilian Emanuel, the markets are mimicking 1999 and for those of us who were around back then, it's not good news.  As a matter of fact, that's the kind of news that causes companies to stop spending money in a hurry.

If you've been reading anything in the news, you know there's a lot more going on but these four issues directly impact our economy.  And you don't have to live in the US to be affected by the US Economy because according to the NY Times, as the USA goes, so goes the global economy.

These four issues don't suggest a coming boom, they warn of a serious recession, with high inflation, high interest rates, and high taxes, coming soon to a city near you.  In other words, an economic disaster.  Not as bad as the complete shutdown we saw in 2020, but probably as bad as the economic crisis we faced in 2009.

So how will that impact companies and their sales teams?

When large companies enact spending freezes, it has a trickle down effect.  For B2B, think cancellations, PO's that aren't issued, layoffs, fear and most especially, real challenges to getting products and services sold unless companies can't do without them.  And even then, there will be more competition and a race to the bottom as companies demand lower prices. Salespeople are ill-equipped and will be scared, while the companies they work for will be too risk-averse to rely on order takers to suddenly sell value in hopes of maintaining margins.

"Selling value will be the key to survival but
selling value does not occur in a vacuum".

It requires strong consultative selling skills (listening and questioning) in the context of a sales process that supports a consultative approach.

Selling value assumes that your salespeople actually got themselves a meeting!  While getting meetings aren't that difficult with good lead generation efforts, meeting with a decision maker is.  46% of all salespeople believe they are reaching decision makers while Objective Management Group's (OMG) data shows that only 13% are actually doing that.  And if the economy tanks the way I expect it to, watch what will happen to those lead generation efforts!

From 2017 to the pandemic, most salespeople were successful in spite of themselves because there was more business than capacity to deliver.  Yet 50% of reps still failed to meet quota.  What will happen to the bottom half of your sales team when there will no longer be orders to take and each opportunity will need to be found and properly sold?  It doesn't sound very exciting.

Now is the time to take control of what lurks ahead.

The. Single. Most. Important. Thing. You. Can. Do. Right. Now. is to have your sales team professionally evaluated.  You must:

Those are the first ten things that came to mind but there are hundreds of other questions that could be and should be answered as part of a sales force evaluation.  What do you need to know about your sales team to navigate what I expect will be a very difficult 2022?

Explore OMG's data from more than 2 million salespeople in the 21 Sales Core Competencies we measure.

Request a sample from a sales team evaluation. Check off the following boxes on your sample request: 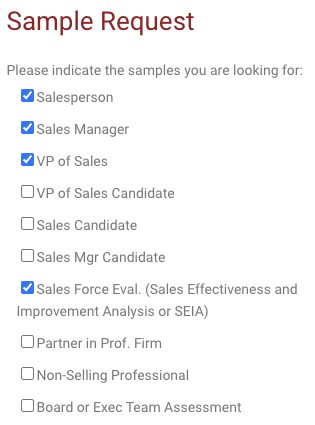