The 2018 World Series is in the rear view mirror, my family can go to sleep at a normal time again, and sports fans can finally devote their attention to Basketball, Hockey and Football (and soccer okay?  You got me to say it).  I'm still getting calls and emails asking if I've come down from cloud 9 over the Red Sox world-series victory but I keep explaining that I was never on cloud 9.  The series victories over the Yankees, Astros and Dodgers, all 100-win teams in their own right, were too easy. There wasn't enough drama, tension, adrenaline or doubt.  There was no sense of urgency.  That's the topic for today - urgency.  Check out the table below: 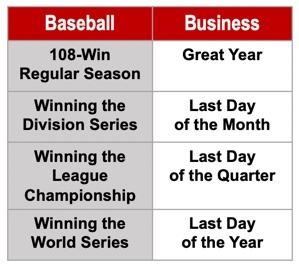 As you can see in the table, each clinching victory became bigger than the one before it as final days of the month, quarter and year increase in importance to a company.

If a company has the month won, the quarter in the bag, and even the yearly revenue goal met by the end of November, there isn't any drama, doubt, tension, or urgency.  They just keep on selling without any pressure.

We know that 50% of sales reps won't hit their quota this year because the same thing has been happening for years without signs of improvement.  That's not surprising given that the data from 1831611 salespeople evaluated and assessed by Objective Management Group (OMG) shows that the bottom 50% of salespeople are very weak.

Most sales managers don't have their months, quarters and years end like the Red Sox did.  They're pushing, pulling, demanding, asking, strong-arming, discounting and screaming to get the deals in, all because the deals were never closed in the first place.  If customers will place their orders on the 30th of the month, they would have placed them on the 20th if the salesperson was effective.  But prospects have learned that if they hold out, the call offering a discount will come through at the end of the month.  And the difference between good and crappy salespeople?  The ability to create Urgency.  This article shows how Elite salespeople create urgency 326% more often than weak salespeople!

There's one other factor at play in last day madness.  Crappy sales managers are part of the mix too and effective coaching, as you can see in this article, is achieved by only 10% of all sales managers.

There will always be urgency to win. - The question is simply, will you create the urgency and eliminate last day madness, or by failing to create urgency, require unnecessary urgency - madness - on the last day instead?