Are Sales and Sales Management Candidates Getting Worse? 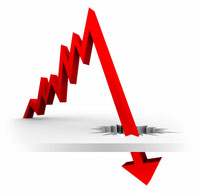 There are more sales experts, self-professed and otherwise, than ever before.  There is more free content on sales and selling than anyone could have imagined.  There are probably twice as many books on the subject than just 10 years ago.  There are categories of sales tools and CRM applications where none existed a few years ago.  Companies are spending more money on sales force evaluations, sales training, consulting, sales leadership development, sales process, infrastructure and sales recruiting services than 5 years ago.  And selling has changed more in the past 5 years than ever before.

With all that, shouldn't the quality of sales, sales management and sales leadership candidates be on the rise?  Yes, it should.

But there's a problem.  The quality has not risen.  It seems to have worsened! 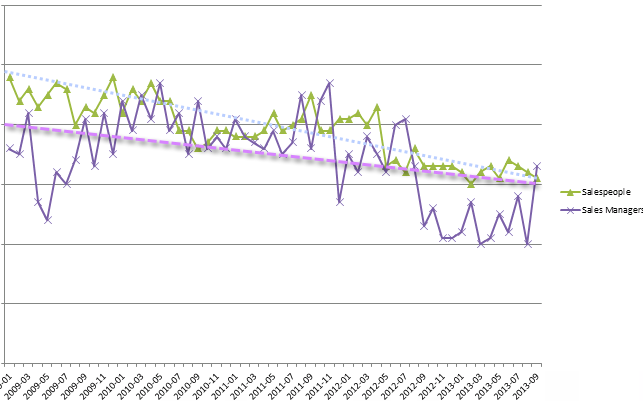 There are four possible explanations for this considerable drop.

1.  The first dates shown on this table - early 2009 - represent a time when the country was deep in recession.  When their industries were negatively impacted by the economy, many salespeople and sales managers were laid off or left voluntarily to search for better opportunities.  There were some very good salespeople and sales managers among the mix of the total population of candidates.  During the past 12-18 months, good performers have been a rarity among both groups with mediocre and poor candidates being the norm rather than the exception.

2.  During 2009, only those companies with cash and a willingness to spend it - mostly mid-market companies - were hiring salespeople.  They tend to pay more than smaller and larger businesses and their recruiting efforts, compensation and incentive plans are designed to attract stronger salespeople.  In the past 2 years, the large and small companies have resumed their recruiting efforts, but their less-impressive compensation plans don't appeal to strong salespeople at a time when weak sales and sales management candidates make up most of today's available pool.

3.  Despite the factual nature of explanations 1 and 2, when you also weigh the availability of content, books, video, training, evaluations, consulting and development, the trend should still rise instead of fall.  This would point to an overall weakening of those in our profession.

4. Dramatic changes have made professional sales a much more difficult profession.  The top 10 changes include:

As a result of these dramatic changes, salespeople who were once quite capable of succeeding, while using a traditional transactional approach, now struggle and even fail with growing regularity.  The growing percentage of salespeople, who don't make the grade, have simply failed to adapt, learn and improve.