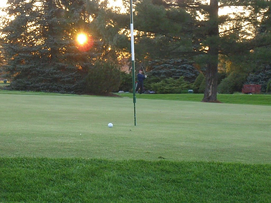 My friend, Rick Cayer, sunk his first-ever eagle putt today and I saw it all.  While I've been golfing for only a few years and suffer from tremendous inconsistency on the course, Rick has been golfing for more than 20 years, knows what he needs to do, and executed perfectly.  On the 455 yard par 5 6th hole, he hit a driver about 280 yards right down the middle of the fairway.  He followed that with a pefectly stroked hybrid for 175 yards to within a foot of the pin and tapped in for an Eagle.

Veteran salespeople are capable of pulling off the same heroics, but only when they execute the sales process perfectly. Today, one veteran salesperson told me about all of the short cuts he took to reach his lofty goal.  He used an internet web site to do his closing, skipped over important questions to uncover compelling reasons to buy, and failed to qualify, all because he was selling something more transactional than normal.  He not only used short cuts, he used crutches despite having the ability and track record to flawlessly execute the sales process. His result?  He failed to hit even 10% of his goal!

Last year around this time, I wrote this article about how easy it is to get away from the sales process and other things you must do to achieve consistent results.  In these difficult times, the one thing you can't do is attempt to do it without systems and processes because they are about the only things you can rely on.

Congratulations Rick! It couldn't have happened to a nicer guy.