How Stealing 2nd Base is Today's Secret to Success in Sales 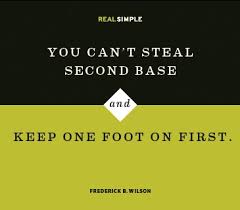 Yesterday, I was coaching first base in the game that would determine the Little League championship for our town.  It was late in the game, we were down by 4 runs, and had runners on 1st and 3rd.  The runner on 1st base would need to steal second and perhaps draw a throw that would allow the runner on 3rd base to score.  A double steal!  There was only one problem.  He had been reluctant to steal all season.  When given the sign, when asked, when told, he just didn't want to steal.  After all, one of the 10 Commandments is "Thou Shalt Not Steal."  He couldn't defy God for the sake of baseball, could he?

I had a private chat with him at 1st base and told him that this wasn't about him or what he was comfortable with.  This was for the team, we were playing as a team, and would win as a team.  He should want to steal - for the team.  He didn't.

Another chat, another reminder, another non-attempt.

A third chat, another request.  No movement.

The count on the batter was 2-1 and it was time for a desperate fourth chat.  This time, I demanded, with dire consequences (that I won't reveal here), that he steal.  He went.  The catcher threw and he was safe at 2nd and the run scored.  A momentary victory in the game within the game.  A play that will change him, even though it wouldn't change the eventual outcome of the game.

This morning, thinking about that play again, I'm reminded of two selling scenarios that are nearly identical.

First, there are the salespeople who just don't want to pick up the phone and make calls.  How similar are they to the kid who won't steal 2nd base?  We're not asking these adults to steal, but we are asking them to talk to strangers.  Is it possible that when faced with the task of making calls, they revert to their lessons from early childhood?

Today, kids don't even talk on the phone.  They text.  I can't get our 12-year-old son to make a phone call under any circumstances.  What are the chances that he would make calls if he entered sales as an adult?

The second scenario involves all of the entrepreneurs out there who, according to a December 2013 Forbes article, number around 20 million!  Most entrepreneurs don't give selling a single thought until they have already started their businesses.  It's only then that they realize they might have to sell something in order to eat.

I wrote an article that appears on the #1 site for entrepreneurs, EvanCarmichael.com, that explains the 3 biggest obstacles entrepreneurs face when they must sell and how to overcome them.  The article applies to everyone in sales, not just entrepreneurs.  You should read it!

Back to making those cold calls.  In the old days, if a salesperson didn't pick up the phone or knock on doors, we starved.  There just wasn't any other way around it.

Today, there's social selling and while some view it as a solution for call reluctance, I think it's a crutch.  I'm all for anything that helps a salesperson to sell, but does social selling really do that?  Does adding someone to your LinkedIn network make a sale?  Is having a connection the same as being connected?  Is being connected equivalent to being able to schedule a meeting with that individual?  Is being active in groups the same as making calls?

While we are surely more visible through the social networks, all of that busy work serves as smoke and mirrors for the salespeople who are reluctant to pick up the phone and make calls.  They have hope (by all accounts a good thing), but it's false hope.  After someone accepts the invitation to join their network, they can't reply with, "Now that we're connected, I want to talk with you about what we do.  Is it OK if I call?"  While they can hide behind the keyboard and type a lame request like that, the lack of an actual conversation will make it even more difficult to schedule a meeting.  And you can't have a conversation over email or LinkedIn.

There's an old saying in baseball that has been around forever and used as an anaology for many things:  "You can't steal 2nd base and keep one foot on 1st."

The same goes for selling.  You can't schedule a meeting if you don't pick up the phone.