The One Sales Question I've Been Wrong About for Years 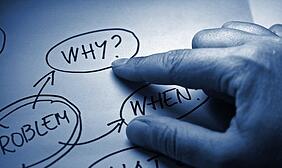 I must be a moron.  Stupid.  Dumb.  Blind.  Certainly, I couldn't have been paying attention or it wouldn't have taken me 28 years to figure this one out!

The problem is that today, while writing a script for a client, it dawned on me that the question actually sucks.  Not because it's only one word, but because of what occurs when a prospect answers the question.

On the positive side, it provides a salesperson with more and better information from which another question can be asked.  All of the great reasons for asking that question are still there.

BUT...on the negative side, when a prospect answers certain "Why?" questions:

...they are actually supporting their previous statement, selling themselves and convincing themselves that they are right.  You are helping them to dig their heals in deeper, making it even more difficult to change their minds.
So what can you ask instead of "Why?"
How about one of the following?
Don't limit your options to the five listed above.  Any question or comment is fine, as long as it doesn't help them reinforce their original position.  It's even OK to say (initially), "That's smart" and then follow-up with your next question.  Acknowledging their position shows that you're listening, and your agreeable response lowers their resistance.  That provides you with a better chance that your follow-up question will be more effective.
Image Copyright: maigi / 123RF Stock Photo