Salespeople Become More Effective But Can They Become Worse? 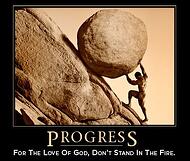 Objective Management Group (OMG) provides Progress Evaluations to determine how much improvement has taken place during the period of time since an individual or a team was orginally assessed.  In most cases, especially when effective training and coaching has taken place, significant to dramatic improvement occurs.  Occassionally though, a salesperson will appear to be worse - weaker - than the first time.  How could this be?

I'll explain some of the scenarios where this should not be alarming, as well as some where it should.

Becoming Emotionally Involved - This weakness tends to show up when salespeople are going through comprehensive training and/or coaching and development.  It means that they are thinking too much - an unsurprising byproduct of the development work.  When a salesperson develops this weakness post evaluation it's really nothing more than a sign that they are in the mid-development phase but don't yet own their changes.

Inexperienced Salespeople - When fairly new salespeople appear weaker the second time around, it is usually an awareness problem.  The first time they were assessed, they were going on theory - how they imagined they would think, behave, act and/or perform in the various selling scenarios presented.  This is useful for identifying the weaknesses of someone who hasn't previously sold.  The second time around, they are answering these questions based on how they actually thought, behaved, acted and/or performed in various selling scenarios.  When reality differs - even slightly - from theory, the result of experiential awareness, it can result in a weakness that didn't appear the first time around.

Motivation - Motivating factors are moving targets.  The two biggies, Desire for Success in Sales, and Commitment to Do What it Takes to be Successful in Sales, can change depending on work/life needs, challenges, changes and results.  Think about a woman who, when assessed for the first time, had strong Desire.  Then she married a wealthy man, experienced a lifestyle change, became satisfied with her financial situation, and when assessed again, no longer had strong Desire or Money Motivation.  Think about a man who had strong Commitment the first time around.  Then the economy tanked.  Since he was in the building materials industry, he began to struggle - repeatedly.  Soon, he was questioning whether sales, especially that job in that industry, was for him.  When he was assessed a second time, his Commitment was weak.

On the other hand, if a salesperson's strengths become weaknesses in the areas of Comfort Talking About Money, Need for Approval, being Too Trusting, or Buy Cycle, then we have some issues that need to be explored.  If selling skills get worse, that would also be reason for concern.

Tomorrow, we'll explore some of the strengths/weaknesses and skills/challenges where you should see improvement.