Rod Stewart and Barry Manilow Could be Your Veteran Salespeople 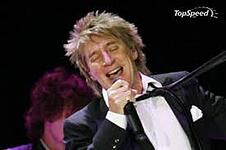 Admit it - you're intrigued imagining how I'll connect this post to selling.

Barry Manilow dominated the 70's with hits like "I Write the Songs" and "Copacabana".  Rod Stewart dominated the 70's and 80's with hits like "Tonight's the Night" and "Hot Legs".  But they are far more alike than that.  They are both skinny 65 year-olds with coiffed blond hair and in the last few years received horrible face lifts. Oh yeah, women love them. Could they be the same guy?  Were they separated at birth?

Instead of continuing to churn out hits in the past decade, both have played it safe.  Rather than risk recording new songs and having a new generation reject their music, they both recorded songs that others had hits with.  Manilow recorded albums of Broadway Hits, Love Songs, and four albums of Greatest Hits covering the 50's, 60's, 70's and 80's.  Stewart recorded four volumes of the Great American Songbook as well as the Greatest Rock Classics.  They already had a huge fan base. Rather than attempt to expand it, appeal to a new audience, and sell their original style of music to a younger generation, they simply continued to generate renewal business from their existing customers.

Isn't that just like so many of your veteran salespeople?  There isn't a single complaint that I hear any more often than this one:  "My veteran salespeople are living off of their existing customers and I can't get them to go and find new business."  Just like Barry Manilow and Rod Stewart!

Yesterday I spoke with a client who had questions about a Sales Candidate we assessed.  He wanted to recruit this candidate who had built a nice territory from scratch in the 80's and turned it into a #1 territory. The client wanted to bring this candidate to a new city and recreate that success. But the assessment didn't provide any indication that the candidate would succeed.  The client demanded an explanation.  Why did this superstar assess so poorly?

The answer is very simple.  While he may have been motivated to build that territory 30 years ago when he was a lot younger, he is not motivated to do it again today.  Think about it.  If you're a 30 year veteran of the sales business, would you be motivated to start from scratch in a new territory?  Our assessment simply showed that this candidate no longer had the Desire or Commitment he once had. He lacked Money Motivation and didn't have the required skills. What?  How could the skills have gone away?  They didn't.  He never had them to begin with.  In the 80's he may not have needed the skills.  It was much easier to build relationships and provide a quality product to take business away from competitors. It turns out that this sales candidate has been living off of the client base he developed back in the 80's and hasn't sold any new customers in years. In the current challenging economy, with all of the resistance prospects have for buying, salespeople and change, without skills, he would simply get killed.

Barry Manilow and Rod Stewart would likely get killed today too.  Their songs wouldn't appeal to today's kids and I would guess that neither are very motivated to change their styles and start from scratch just to risk alienating their existing fan base.  They could be selling for you!