Top 10 Steps to Initiate Salespeople to Their Roles 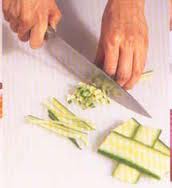 From time to time over the past 4-5 years I have written about our son and the similarities between him and salespeople who are very much like children (click for the entire series of articles), even when they are eight years old!

He wanted to help in the kitchen a couple of weeks ago.  More specifically, he wanted to dice the carrots.  I don't really cook but dicing is one thing I can do well, providing a little of the manual labor while my wife creates gourmet meals. I have mastered the French Chef's knife.  As a matter of fact, if you read the Rainmaker Maker Blog, my friend, Rick Roberge, is another sales guru/French Chef Knife master.  He taught me to use one 37 years ago!

Here are the steps I took to show our son how to dice the carrots:

This is exactly how to initiate salespeople, whether they are new to your company, new to their role, or new to sales.  Don't vary at all from the steps above.  More importantly, don't assume that because they have sold for 10 years they'll know what to do or be able to do it effectively.  Follow the steps!

We also had a light snow fall that week and our son wanted to help out with the shoveling. We shoveled all of the walkways together - no problem.  We have a large circle as part of our driveway and he suggested that we shovel that next.  Normally, I wouldn't think of shoveling the circle.  I usually clear it with the snow blower.  The thought of shoveling even a couple of inches of snow from that circle seemed daunting to me, but not to him.  He didn't have enough experience to know that this was too much work.  So we shoveled the circle together and got it done.  He was exhausted - one of the few times that I wore him out - but I learned a valuable lesson.  Don't share your self-limiting beliefs.  Let them develop their own!

It's the same way with salespeople.  Don't tell them that they will waste their time calling on a person with that title, an individual from that industry, or a company that size. Let them make those mistakes first and then help them recognize the errors of their ways and learn from them.  They're going to do it anyway!