The Difference Between Sales Commitment and Work Ethic 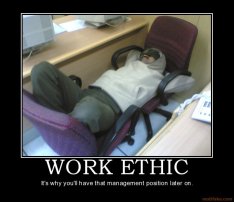 When a sales force evaluation shows that a salesperson lacks commitment, the most likely remark we hear from management is usually, "but he has such a good work ethic!"  When we ask what they mean by "work ethic", management often say things like:

"Works long hours" is obviously the one most consistent with "good work ethic" but the others?  Not so much.  Most important to note is that none of the four responses has anything to do with Commitment.
Sales Commitment is about a salesperson's willingness to do whatever is necessary in order to succeed.  Those necessary things usually don't occur in the office, but in the sales cycle, including:
Let's look at the 2011 Boston Red Sox historic collapse which concluded last night with a dramatic and stunning 9th inning loss to the lowly Baltimore Orioles. Moments later the Tampa Bay Rays beat the 1st place New York Yankees in extra innings when they overcame a 7-0 deficit to tie the Yankees in the last half of the 9th.  The Red Sox, who also own the record for the greatest comeback in sports history (2004), had a 9.5 game lead over the Rays on September 1.
Was it lack of commitment or work ethic that fueled their collapse?
I would say it was both.  Some guys couldn't perform in the clutch - nothing to do with how many hours they practiced or worked out or how hard they worked out.  Mental toughness is a commitment issue.  Some guys were out of shape and either too tired or too sore to perform to expectations.  That is a work ethic problem.
In sales, unlike sports, work ethic is nice, but given a choice between strong work ethic OR strong commitment, I'll take the salesperson with strong commitment.