Will This Sales Candidate Really Fail If We Hire Him?

This week I called the type of candidate that traditional HR professionals love - his resume was formatted, there were no typos, his background was exactly what my client craved - but the assessment wasn't so impressed with him; he was a borderline candidate at best.  Normally this candidate would not have received a call from me but because he was a good fit, I was looking for a needle in a haystack candidate (again) and was on the cusp, there was no downside to a 3-minute call.

What a disaster!  He didn't engage me ("Hi"), couldn't articulate how his experience met the description in the job posting ("I did all of that"), failed to string a complete sentence together ("Mine was more money") and didn't provide a single example, detail or explanation.  He also failed to ask a single question.  And he was on the cusp.  Weak salespeople don't sound that bad so why didn't the assessment tell me about this issue?

It turns out that while the major findings we typically focus on were acceptable, there was one finding - The Sales Posturing Index - that was the lowest I had ever seen.  On a scale to 100, "Fred" scored 20! 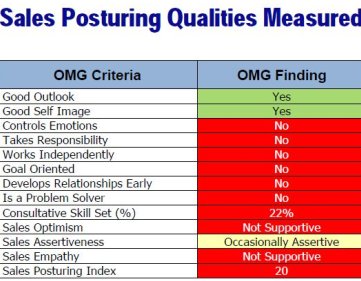 While Fred was confident enough, he had no clue how poorly he came across, how awful his first impression was, and how badly he presented himself.  Most obvious during the 3-minute call were the following Posturing Qualities that he didn't possess: "Develops Relationships Early", "Consultative Skill Set", "Sales Optimism", "Sales Empathy", "Sales Assertiveness", "Goal Oriented", and "Controls Emotions".

As always, this assessment is very predictive and you only need to believe in it?

Which side of the cusp was the candidate on?

When it says Not Recommended, you really need to believe the science behind the recommendation - if you dare to hire one of these candidates 75% of them will fail inside of 6 months.