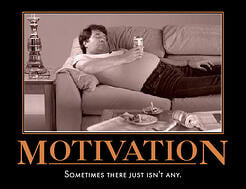 In April, I wrote an  extremely popular article on Whether Money Motivated Salespeople are a Dying Breed.  You'll need to read that first to understand the context for today's article.  Okay, ready?

Rob asked about the consequences in the hiring process when companies believe they have to offer enough money to get people on board.  He wants to know if there are any practical tips to acquire candidates that are intrinsically motivation.

It's easy to misunderstand the nuances of motivation but it doesn't mean that you offer an intrinsically motivated salesperson less money.