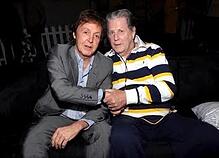 Throughout the 60's, Paul McCartney and Brian Wilson were not only prolific hit-makers with their popular bands, the Beatles and the Beach Boys, they actually competed against each other.  It is well known that they listened to each others' innovations in popular music and attempted to out-do each other.  Both are still flourishing today, continuing to record albums and tour the world.

Recently, there was evidence that the competition between them hasn't really stopped.  In 2010, Brian released a tribute album to George Gershwin and, in 2011, Paul McCartney released a tribute album to his favorite standards from the great American song book.  While the musicianship is terrific on both albums, it's clear from the first notes that they should stick to doing what they do best - the pop music they compose themselves.  Both have at least two core competencies:  writing and singing their own songs.  That's why they're called singer/songwriters and when they attempt to copy work by others, it just doesn't work.

Their examples are extremely similar to what takes place in the assessment business.  There are some wonderful assessment companies that have been doing their thing - personality assessments and behavioral styles assessments - for decades.  The companies do those two types of assessments quite well.  They are accurate, informative and useful when used as originally intended - to understand people better.  Over the past decade most of them have attempted sales assessments and the results are very similar to the Paul McCartney and Brian Wilson albums.  They should stick to what they do best!

Behavioral styles and personality assessments, when used for sales, are extremely limited, when it comes to sales-specific traits and behaviors that can be measured, because all of the questions are asked in a social-context, rather than a sales-context.  The assessment companies make translations and assumptions along the way and the findings are not consistent for sales, nor are they predictive.  In my opinion, the only components of these assessments that were built for sales, are the marketing and advertising pieces used to convince you that they created sales assessments!

Objective Management Group is like George Gershwin and the other great songwriters of another era; and the personality and behavioral styles assessment companies are like Brian Wilson and Paul McCartney.  Gershwin didn't invent music or songwriting, but his songwriting style was original and when a pop singer/songwriter like Brian Wilson attempts to reintroduce it, well, let's just say it falls flat.

Have you listened to either album?

Do you have experience with any assessments?

Can you add your thoughts?