Basketball and the Difference Between Sales Studs and Sales Duds 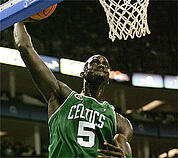 I heard former NBA all-star and current ESPN basketball analyst, Bruce Bowen, talking about Kevin Garnett of the Boston Celtics.  He characterized Garnett as one of the toughest competitors on the court, unlike some younger, very talented players who aren't as competitive and don't know how to close out games.  He said the difference is that Garnett is trying to win while the less competitive players are trying to make friends.

I've been talking about Need for Approval being one difference between the elite 6% of salespeople and the bottom 74% of salespeople for years, but this is the first time I have heard of the affliction as a differentiator in sports.  In one of my books - it was probably Baseline Selling - I discussed how it would play out if the pitcher had need for approval from the batter and vice versa.

Why is Need for Approval such a differentiator?

In the discussion about Kevin Garnett, Bowen said that Garnett doesn't care what other players think about him. Given his reputation as a shut-down defender, we can interpret that as he doesn't care if other players have a problem with him being tough, unrelenting, unfriendly, angry and passionate on the court. He isn't going to smile at an opponent, ask how he's doing or praise him for a nice play. He doesn't care if his opponent has a problem with that.

Who says that those prospects and customers like them now?

Because they don't ask tough questions and don't ever push back or challenge anything, we can be certain that they aren't having the type of conversations that add value.  And if they aren't adding value, their prospects and customers probably don't respect them.

Do you know which of your salespeople have need for approval and how to deal with it?