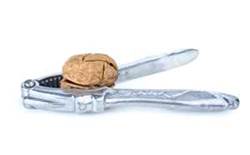 Last week I received a call from the Boston Ballet - part of their annual fundraising drive.  I hate these calls as much as you do, but the lady who called, engaged me by asking if I was looking forward to this year's new production of The Nutcracker Ballet.

When she got to the part when she was asking for money, she screwed up (at least with me).  She only asked for a $35 donation.

So, what is the lesson here?

It's two-fold.  Everybody has a comfort zone with money - businesses, non-profits, salespeople, clients, customers, donors and prospects.  The key is to be aware of it and manage it.

If you have salespeople asking for more than is comfortable for them, you need to replace your salespeople.

If the discomfort with money stretches to both salespeople and prospects, you won't be able to sell anything!

And if both sides are comfortable with the amounts being asked, money won't ever be a problem.

The money issue is a bigger problem than most people realize.  Get it right and selling gets much easier!  Do you need a way to figure out whether your sales force can handle the money which you need them to get?  A Sales Force Evaluation will accomplish that.