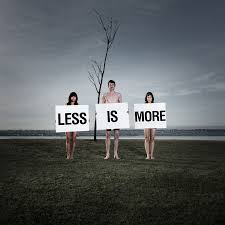 Two clients called this week to express their concerns.

During the past 6 months we dramatically changed what their salespeople were doing on sales visits.  They used to show up, take five minutes to present their product and then the prospect would ask for samples.  Now, they completely qualify the reasons, expectations and time allotted for that visit, have a meaningful conversation about their prospect's business, and get commitments to have their products specified on future work.  They are enjoying much better conversations, achieving much better engagement and getting much stronger commitments.

Client #2 was concerned because their most important metric was proposals and the number of proposals are down from the same period last year. I asked what drove proposals and he told me that RFP's and sales calls led to proposals.

During the past 6 months, we dramatically changed how their salespeople responded to RFP's and what they were doing on sales calls.  They used to respond to an RFP by taking a day or two to write and submit a proposal with fewer than 10% converting to sales.  They used to show up, talk about features and benefits and ask if they could submit a proposal (remember it was a key metric so the more the merrier).  Now they call the prospects who send RFP's and have meaningful conversations to differentiate themselves from their competitors (who are sending proposals).  They learn if they is a fit, a real opportunity, and how they can do business together.  Sales calls are no longer presentation-centric.  Instead, their salespeople have meaningful conversations about business problems they could solve and propose solutions only when the prospect is serious about doing business with them.

I suggested that the decrease in proposals could be the result of more effective selling, salespeople choosing not to propose to everyone, and a much more comprehensive qualification.  I also asked for the latest conversion ratio for proposals to sold.  It was up to 45% meaning that there was a 400% improvement in efficiency and effectiveness!

You probably have a key metric that's old school too.  By old school, I'm suggesting that it was once a metric that was a key indicator of future business but now it's only a measurement of what you're measuring - in these two examples - sample requests and proposals.  There are better metrics for both of these companies.  Instead of sample requests, they should be measuring the number of new commitments to specify their products.  And instead of proposals, a more telling metric could be qualified opportunities.

Review what you used to believe was meaningful and ask yourself whether it is truly a key indicator of future business or if you are simply using convenient, old, comfortable metrics because you always have.  Less is usually more.