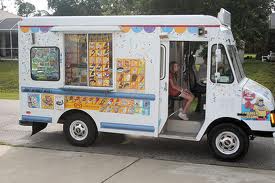 Even in the technology age, one decades-old summer tradition still excites young children.  They hear the bells and the music off in the distance and the anticipation builds.  As the volume increases you can hear the neighborhood kids yelling, "He's coming! He's coming!"

What's up with that?  Their parents probably have ice cream in the fridge.  If they don't, it's probably no more than a five-minute drive to find a place that sells or serves it - especially during the summer.  It costs much more to buy it off the truck.  So why does the daily late afternoon appearance of the ice cream man still have so much appeal?

This isn't a rhetorical question and I don't know the answer.  Maybe the ice cream man provides children with an opportunity to be kids! Maybe their parents encourage it because it reminds them of their own childhood thrills.  Maybe it's because it gets kids out of the house.  But here is what I do know.  That simple, inexpensive once per day treat gets kids excited enough that you can use it to change behavior.  There are two primary approaches:

The power of the ice cream man!

Salespeople are the same way.  You may not be able to promise them ice cream in return for scheduling 8 new meetings this week, but I'm sure there is something that will motivate them to do it.  The question is, "what?"

What will get them motivated enough to do what they haven't been doing enough of?

What do you need them to do more frequently or more effectively?

Simply pick one from the list and for each salesperson, learn about their personal equivalent to the ice cream man.

If 50 is the new 60 and small is the new big, then Sales Leader is the new Ice Cream Man. Just pass on the truck...