When I'm driving, I usually fire up Spotify and listen to one of my playlists but for some reason, last week I chose to play songs by the 70's band, The Raspberries.  I like three of their songs a lot but lacked familiarity with the other songs on their four albums. I figured that there had to be some other good tracks to discover.  Wrong.  The Raspberries just do not compare to some of the great talents from their era.  The Beatles, The Beach Boys, Chicago, Earth, Wind and Fire, and solo artists like Elton John, Billy Joel, Michael Jackson or Lionel Richie routinely produced albums on which every song could have been or was a hit single. [Note: It seems like all you needed to be a star in the 70's and 80's were two first names and not just the four I named, but also consider Huey Lewis, Carly Simon, Paul Simon, Rod Stewart, George Harrison, and James Taylor!] The comparison of successful hit-makers to common musicians are analogous to sales pipelines where top salespeople have a never-ending flow of good, strong, qualified opportunities and weak salespeople have fewer opportunities and most of them aren't very well qualified.

If we look into some of Objective Management Group's (OMG) data from the assessments of  2,296,264 salespeople, we see the following as it relates to the Qualifier competency and its 12 attributes: 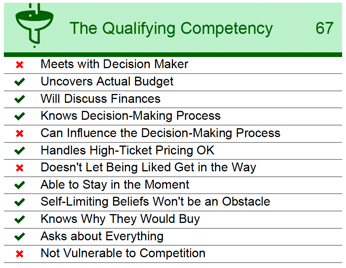 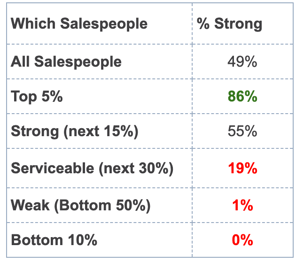 We were first-time diners at Friendly Toast, an all-day brunch restaurant in the Boston area. Unfortunately, my inner 12-year-old ordered and because of my inability to control him, I was ecstatic over my hot chocolate peppermint waffles!  My reaction was consistent with a sales opportunity where the salesperson receives a very strong introduction from a happy customer, the large opportunity was completely teed up, the sales cycle was short, sweet, and easy, and the deal closed without competition.  How many salespeople EVER get to experience that kind of easy?  According to OMG's data, only 3% of all salespeople have a steady flow of quality introductions and referrals and for weak salespeople, it's half that.

One of the dashboard displays in my car shows the pressure for all four tires. 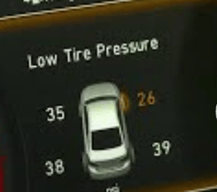 When a tire begins to lose pressure the early warning system is incredibly helpful.  Membrain is the CRM application that we most frequently recommend to clients, and our clients LOVE, LOVE, LOVE Membrain compared to Salesforce dot com.  Membrain comes with a win/loss analysis consisting of more than a dozen criteria.  While they won't all have significance, most of them do.  The four analyses that I believe are most analogous to the tire pressure warning are:

The  taller green bars in the Time in Stage image shows that the largest percentage of deals won remain in each stage for only a day or two while the odds for closing deals that remain in stages for more than a week are not good.

The Stalled image above shows that the average time stalled on a won deal is 43 days compared with 110 days for an archived deal.

And finally, the Age finding (not shown) tells us that the average age of a won deal is 39 days, compared with 105 days for an archived deal.

Together, these four components of the win/loss analysis show that when deals are stalling, we don't spend time working on them, and the chances of closing them are in direct disproportion to how long they stall.  It's our version of the tire pressure display!

What do these four analyses have to do with qualifying?  The more thoroughly qualified the opportunity, the less likely it is to stall for long, and the more likely it is that you can either lose fast - a good outcome - or win fast - a better outcome!

So whether it's mixing drugs and alcohol, scoring a prolific number of hit songs, eating an awesome meal, or a dashboard warning indicator, they all tie back to the importance of thoroughly qualifying opportunities and winning deals.

You're thinking, "You've got to be kidding me!"  How does this title tie in?

I was talking with a client last week and we were comparing notes about how we both played competitive junior tennis back in the day.  There was one tournament where I was in the finals and I was trying to figure out when exactly that might have been and I remembered that the band Chicago had its first big hit with the song "25 or 6 to 4".  After googling it for the release date, turns out "the day" must have been in the summer of 1970.

25 or 6 to 4 brings me to 2 to 16.  A friend and I were comparing notes on our 9-year-olds when I said that ours is 7 years away from driving and only 7 years removed from 2.  Sometimes we observe mature, smart, 16-year-old thinking and behavior from him and other times we watch him behave like a 2-year-old, complete with tantrums. 2 to 16 means there is a 14 year swing and we rarely witness the behavior of a 9-year-old.

2 to 16 brings me to your salespeople.  You will see the equivalent of that 14-year swing in most salespeople, on most days.  Sometimes they will seem quite close to the salespeople you want them to be - scheduling meetings, asking questions, thoroughly qualifying, and closing.  Other days they will act like rookies - getting blown off the phone, spending their sales call time talking features and benefits, responding reactively to requests for quotes and proposals, and chasing the business down until a salesperson from another company closes it.

That 14-year swing is huge.  You can't afford to have your salespeople behaving like facilitators, order takers, account managers and amateurs - ever.  You need them to be proactive - selling consultatively, everywhere, and always.

Children grow out of their age swings but salespeople must be managed, developed, trained and coached out.