Derek Jeter Shows Salespeople How to Convert Leads to Opportunities 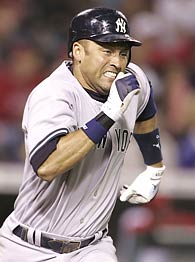 Derek Jeter, the leader and all-star shortstop for the New York Yankees, goes all out running hard to first base on every ball he puts into play.  As a result, it's easy for management to expect the same kind of hustle and effort from everyone on the team.  After all, if the star does it, then everyone should do it. Other teams?  Not so much.  David Ortiz of the Boston  Red Sox never runs hard on a ground ball so what does management say to a younger player who also fails to run hard?

The sales force has similar issues.  If your Star Salesperson prospects like crazy it makes your job very simple.   You just point and say "Do what she does and one day you'll get the same results".  Then you hold your salespeople accountable to those expectations, let your top performer lead by example and watch what happens.  But the reality is that most of your Star Salespeople aren't really stars, don't do what stars do and live off of business they developed years ago or worse, off business somebody else developed years ago.  Then what?

Speaking of the grunt work, I read a statistic from one company that showed that they didn't get long term customer value from leads until 6-10 follow up attempts were made.

That's just to get to first base. (Shameless Baseline Selling tie-in there)

How many of your salespeople are giving up WAY before 6 attempts?

How many of your salespeople simply aren't working leads thoroughly enough?

Tell your salespeople that they're going to have to start running hard to first base on every ball/lead that they put into play.