I have to question Geoffrey James for an article that he recently posted on Inc. Magazine's online site.

In his article, he shares a systematic approach for prospecting "loosely based upon a conversation with Thomas Ray Crowel."  My interpretation of his use of the word "loosely" is that he contributed his own opinions to this systematic approach.  That makes the article all the more disappointing.

In the fifth step of the prospecting call, he says that if the prospect sounds interested, you should skip the script and jump right to the close.  Really?  Isn't this a prospecting call?  He makes it sound more like telemarketing than prospecting for appointments or meetings.  It certainly doesn't apply to a complex B2B sale!

He also suggests that you create a qualifying script using the old - very old - method of authority, budget and need.  If you are selling something that requires authority and budget, then you'll require more than need to get them to spend their money and you certainly wouldn't be able to jump right to the close.  Why would we want to qualify this early?  Until we have heard that they have a compelling reason to buy, they won't have an incentive to answer any qualifying questions!

This systematic approach (250 cold calls/week) is based on a salesperson making cold calls all day.  That in itself is very archaic and when it is performed as a full-time function, it's usually by the lead generation team, not salespeople.  After all, if the salespeople are making 250 calls per week, when would they have time to conduct their scheduled sales calls and meetings?

Geoffrey's subtitle for the article is a "step by step approach for building up a sales pipeline."  Lead generation people don't have pipelines and people who close on the first phone call don't have them either.  His steps and examples are not consistent with salespeople who actually build sales pipelines!

If you need to connect with business prospects and build a sales pipeline, read Frank Belzer's terrific book, Sales Shift.  His book has some truly relevant, modern, effective and efficient methods for finding and closing new business - the new way.  And if you want to pound the phones and dial for dollars, my book, Baseline Selling - How to Become a Sales Superstar by Using What You Already Know about the Game of Baseball, has a terrific prospecting section and you can get some terrific tips on reaching 1st base at the Baseline Selling site.

You can also find some good articles on prospecting right here on my Blog. 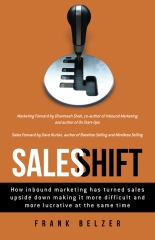 I received more email from this week's episode of Meet the Sales Experts than I usually get following the show.  I was trying to understand what we talked about that resonated so well with listeners.

For one, Frank Belzer, my guest, is known for his ability to keep his pipeline filled and he discussed the things that motivate him to consistently do that.

He also talked about his revelations from the training he conducted in Shenghai last year.  The Chinese sales management executives were thrilled to hear how they should be managing their salespeople.  Franked talked about how different that audience was from his US audiences where resistance, rather than eagerness to learn, is the norm.

Frank also talked about the vast difference between selling the "why me" - they're going to buy, but it's only a matter of from whom - and "why" - they weren't planning to buy and had no interest until right now.

He finished up with some great advice for salespeople and sales managers.

Chinese Salespeople May be the Next Group to Outsell Your Salespeople

What are you going to do when, not only are you out priced, out sourced, out willed, out shipped, and out produced, but also out sold - by the Chinese?

That is the question posed by my Kurlan & Associates colleague, Frank Belzer, who is blogging from Shanghai, where he is spending the week training Asian companies in the art of sales management.

Another one of my colleagues regularly visits Bangalore to train their salespeople that call into the US Market.

So now, you not only have to worry about the effects of the economy, global competition, crazy low pricing from desperate competitors, reluctant buyers, cheaper products from the far east, and salespeople who aren't able to get it done the way they used to, but you also have to worry about getting outsold by salespeople from Asia.

So when will you stop waiting for things to improve and make the improvements to your sales organization? It's the only thing you can control!