Key to Successfully Hiring Salespeople: Getting it Right Versus Getting it Over With I'll get to the content related to the title, but first, some context.

In March, at the beginning of the pandemic, I wasn't paying attention to where I was walking and slammed my big toe into a door.  I destroyed the nail. Not wanting to lose it I superglued it back in place and several months after it turned black, it fell off, revealing an emerging new nail that had grown half way to the tip of my toe.  It took 8 months for a new nail to fully replace the old nail but my replacement nail was perfect and clearly an upgrade over my tired, old, destroyed nail.

Let's discuss what that has to do with hiring salespeople.

There are typically two approaches to hiring salespeople: choosing between getting it over with, or getting it right.

Getting it over with involves a lot of short cuts, and in more than 50% of the cases, disappointment and frustration because you got it wrong.  If you got it wrong there are two more options: living with it or taking the shampoo approach: rinse and repeat.

It's a vicious cycle of hiring the wrong way, making the wrong decisions, needing to start over, and repeating the process again and again and again. Groundhog day.  It can take months or even years before you get the right salesperson into that role.

On the other hand, what would happen if you took the broken nail approach?  Sure, it might take longer, but instead of just getting it over with and dealing with the consequences of your choice, you choose getting it right and being done for the long term.

What does getting it right involve?

A sales manager at an OMG client told a candidate they were going to move forward subject to the results of the OMG assessment.  The sales manager's approach was a huge mistake.  He interviewed prior to assessing when he should have assessed first. He fell in love with a candidate, but still had to assess because it was company policy. That suggested to the candidate that the assessment was the defining criteria when in reality, the assessment is one of around a dozen additional data points that all matter, including, but not limited to cover letters, resumes, experience, expertise, fit, phone presence, interviews, references, intelligence, professionalism, respect, employment tenure, and background checks.  The sales manager raised the candidate's expectations only to destroy those expectations and get upset when the assessment did not recommend the candidate.  You must know that BEFORE you waste everyone's time interviewing and getting emotional!

Recruiting salespeople doesn't need to be difficult or complicated, but it is a process and needs to be completed thoroughly and correctly.  Ask yourself this question: eighteen months from now, would you prefer to have spent five months to get it right and have a productive new salesperson, or three months getting it over with, only to have to do it again four months later, and again four months after that.  Choose getting it right over getting it over with. 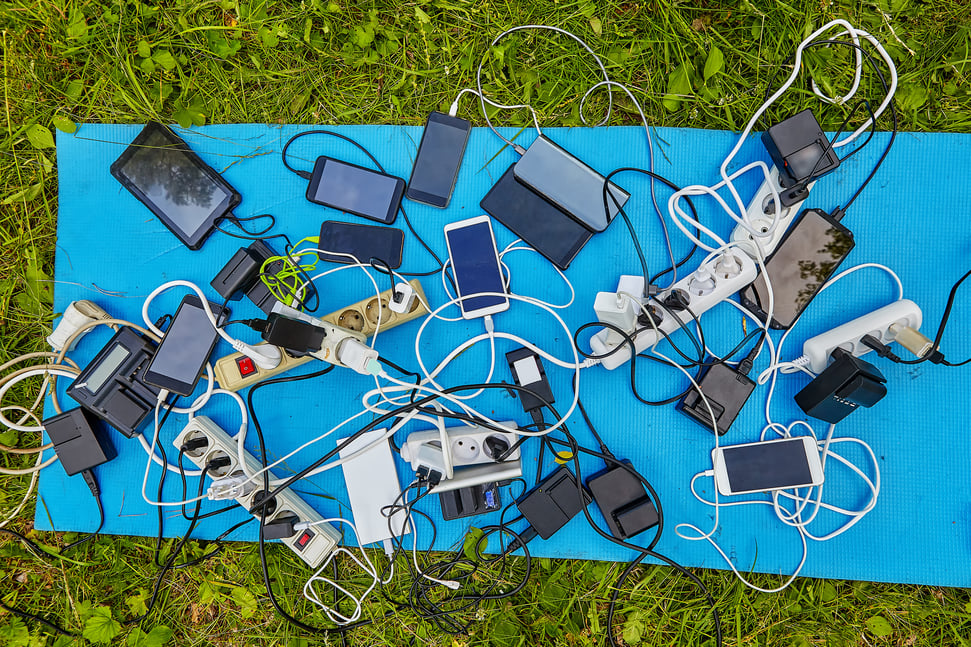 We use remote deposit, a terrific convenience for depositing checks from the desktop without going to the bank.  The only problem is that the software that runs the check scanner isn't compatible with the Mac OS.  It only runs on Windows so we have to remotely connect to an old Dell that takes up unnecessary space. Oh, if only the software for the check scanner was compatible with the Mac.

Compatibility is not only important, it could be one of the most overlooked criteria in hiring sales candidates.  Let's do a deep dive!

There's more to compatibility than who they sell to.  Factors like the length of the sales cycle, how many calls/meetings that entails, your price point relative to the competition, the amount of money they'll be asking for, the quality of the competitor's offering, the effectiveness of the competition's marketing and sales, whether they've worked for a sales manager with a similar management style, how much pressure they'll be under, whether they'll get the coaching and training they require, if they've worked under a similar compensation plan, and more should be considered.  There are nearly 30 variables that help to determine whether a salesperson is compatible for the role.

At my weekly meeting with Objective Management Group's (OMG) COO, John Pattison, we discussed compatibility in the context of another finding we call FIOF or "Figure it Out Factor."  Candidates that have a FIOF score of 75 or better ramp up more quickly than other candidates.  Compatibility is weighted pretty heavily in the FIOF finding because of how it influences the ramp-up time of new salespeople.  The more compatible a salesperson is with your selling environment, the more quickly they should ramp up because they've "done this before."

OMG measures 21 Sales Core Competencies as well as 9 other competencies that are important but not core.  An additional finding is a score for compatibility.

Out of curiosity, we wondered what the average score for compatibility was because we haven't looked at that before.  He asked me to guess and I said "somewhere between 60 and 80."  It turns out that the average compatibility score for all sales candidates is 70.  Not bad!  For kicks, we ran the analysis for the four levels of Sales Percentile which include Elite (top 5%), Strong (the next 15%), Serviceable (the next 30%), and Weak (everyone else - the bottom 50%).  This is what the analysis showed: 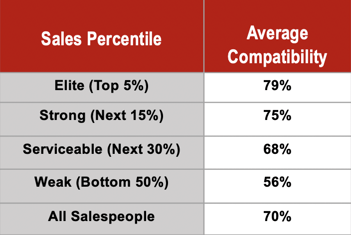 Who knew that compatibility would correlate to Sales Percentile? I certainly didn't think that the distribution of scores would show this kind of correlation.  After all, when we score compatibility, we aren't measuring any of the sales competencies that make up Sales Percentile; only prior selling environments. The top 5% of all salespeople are 41% more compatible with their selling roles than the bottom 50% and it left me wondering, "Why?"

Three theories came to mind and perhaps you can add some additional theories!

Theory 1: The best salespeople naturally identify good fits for themselves so that they can thrive.  We could guess that elite salespeople seek out the greatest selling challenges - something beyond their comfort zone - but perhaps they are simply too smart to sabotage themselves.

Theory 2: The worst salespeople don't pay any attention to fit because to them, selling is just spouting off features and benefits, doing demos, generating quotes and proposals, and taking orders.  Maybe they simply gravitate to wherever they are wanted?

I haven't written about compatibility before but it's worth spending a few minutes to understand the role it plays in sales success.