The One Thing Most Salespeople Are Unable to Do 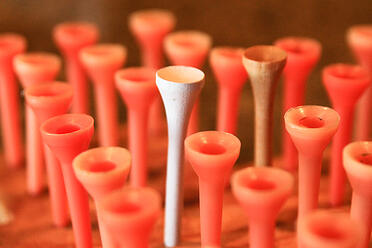 Can you guess what it is - the one thing most salespeople are unable to do?

Based on what I most frequently write about, you might think that it would be consultative selling, but that's not it.  You might also guess that it's the sales equivalent of eating right - not doing demos and presentations so early in the sales process. But that's not it either.

However, there really is one thing that all but the most elite salespeople are unable to do.  It is partly a result of their inability to sell consultatively while continuing to demo, present, quote and propose too early.  Can you guess what it is now?

How huge is this problem and how hot is this topic right now?

The inability to sell value is nothing new though...it has been going on for decades.  What's different now is that so many people care so much about it.  Why do you suppose that it's suddenly so important?

[Insert your answer in the comments below.]  I'll give you my answer right here.

Only one company in each product category can be the low price leader and they have to sell shit-loads of their stuff to make any money.  Everyone else must fight for the business that may not go to the low price leader.  Some try to get the business by competing on price, while others try to get the business by attempting to justify a higher price.  That's where it's essential for companies and their salespeople to sell value.  And most aren't very good at it.  So companies are getting fed up with making very short money on the business they are winning, while losing a much larger number of opportunities than they care to admit.  For most, this is a losing battle that can't continue.  Therefore, one of three things will occur:

If only it was that easy.

There are many reasons why salespeople aren't able to sell value.  The categories include, but aren't limited to:

I don't have the space to write in detail about each of these categories in this article, but there are some things you can do that will help:

Buyers will continue to drive prices down until salespeople learn how to stop it, or companies start dropping like flies.  The time has come to stop the squeezing.  Won't you join me in putting an end to the madness?

Why Your Lowest Price Can Be a Barrier to Closing Sales

It's not really the price as much as it's the context for which that price is provided.  Let's take mobile apps for example.

Let's look at a more complex service with a much higher price tag.  If the salesperson says that their solution is only $5,000 per person, the prospect immediately views this as an expense - and a costly one at that.  How can they justify spending on average $5,000 per person?  However, if the salesperson says, "We can help you recover $3 million in lost revenue and solve your customer retention problem for around $50,000 over the next 8-12 months", it sounds like a bargain and a no-brainer.  The reality is that the $50,000 solution could be more costly even than the $5,000 per person solution.  But the context, the perceived value and expected result are different.

It's not about prices, presentations or building value; it's about putting prices in the context of what those prices will buy.  Compare the two examples above and you'll see both the answer and the obstacle.  The answer is the context.  The obstacle is that your salespeople may not be learning what the compelling reason is for their prospects to spend the money.  Without the compelling reason, it's impossible to replace the red-bolded words above with the words your salespeople need to use.

Another potential obstacle, but hidden this time, is that some of your salespeople are uncomfortable having financial discussions with their prospects.  Those salespeople won't be able to get to the quantification of the problem.  And what about the salespeople who need to be liked?  They can't ask the tough questions and become emotional if they go out on a limb and ask.  These are three of the many hidden weaknesses that OMG often finds when evaluating sales forces.

You can teach and coach on most strategies and tactics, but when your salespeople aren't able to execute one that was properly introduced and demonstrated through role-play, you can be sure that there is a hidden weakness to blame.