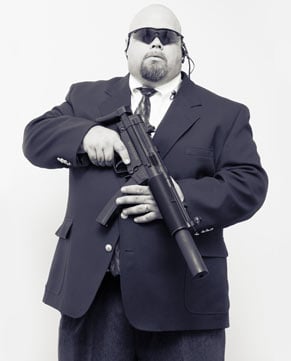 Three separate, but related, incidents occurred this week, all having to do with reaching decision makers.

First, I received a cold call that went like this:

"Hi Mr. Kurlan, this is [name withheld] from [huge company name withheld]. We're a company that.....oh no - the script disappeared from my computer. I...I...can't talk to you without following the script.  Bye."

First off, the Mr. Kurlan thing is like fingernails on a chalkboard - I can't stand it and never will.  About the only time it doesn't bother me is when my Korean dry cleaner sees me and says, "Oh, Mista Kuelahn, hah ah you?"  That makes me chuckle.

Second, the Mr. Kurlan thing again.  It tells me before he says another word that he doesn't know me.  If he did he would call me Dave.

Third, the Mr. Kurlan thing yet again.  It tells me that he doesn't think he is at the same level as me, shouldn't really be talking with me and can't speak my language.

I don't even have to provide commentary about what happened with his computer and script. I do know that there isn't a CEO anywhere that would have listened for even 5 seconds if he had started reading from a script!

Okay, so that's the first incident.  The same day, I was asked about a salesperson at a client's company.  The Objective Management Group (OMG) Sales Candidate Assessment said that he would have difficulty calling on Senior Executives and, of course, he was struggling.  When asked what they could tell him, I said this:

Incident number three:  Yesterday, I received an email announcing the results of a survey conducted by the cloud-based, business presentation company, Brainshark, Inc.  While the survey included plenty of silly statistics, there were some very important findings in there too.

Much of the survey focused on how, when and where salespeople prepare for and deliver presentations to close.  Most of the sales questions (how they sell) focused on presenting - not conversations, discussions, questions, or anything approaching a consultative approach.  So it shouldn't be at all surprising that the survey reported that salespeople were frustrated by the following presentation challenges:

and the following post-presentation/closing challenges:

Also noteworthy were these findings from the survey results:

When OMG evaluates a sales force, one of the two dozen or so questions we answer is whether the company's salespeople can be more effective at reaching decision makers.  We include several factors to support our answer but I can share that the findings come from:

When it comes to salespeople believing, reaching, acting appropriately and speaking the language of senior decision makers, it is very ugly out there.  OMG's statistics show that a whopping 68% of salespeople struggle to reach decision makers.

How do your salespeople measure up?

Sales Assessment Completion Time May Impact Validity of the Findings

How would you like to influence the development of our never-ending quest for improvement in our suite of world-class assessment tools?  We constantly seek ways to expand our world-class insights, legendary accuracy, and real-world relevance.

I just reviewed some new data that Jim Sasena, our Operations/Technical Director, dug up for me.  This particular data set shows the percentage of Sales Candidate Assessments that are completed in a particular amount of time. 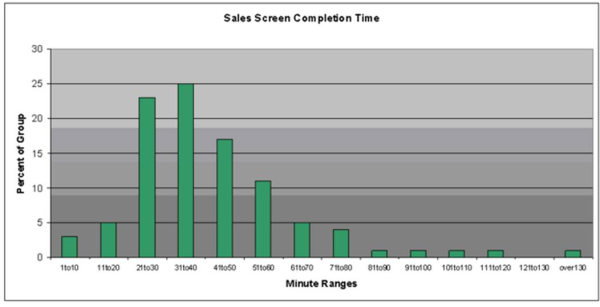 What I found most interesting about this graph is that the percentage of time outside the norm is about 5%.  That number correlates perfectly with the percentage of assessments that have a low confidence score (when we aren't confident in our finding because at least one of the internal analyzes we run on the test data indicates that the person may have tried to fake or influence the results) and our predictive validity (95% - highest in the industry).  Suppose this candidate did great on the assessment and was recommended for your position.  Wouldn't it be cool to learn that it took him 111 minutes to complete the 35 minute assessment and we are discrediting the findings and recommendation?  What do you suppose the candidate did during that 111 minutes?

"Hi Bob, can you call me back. I'm taking a sales assessment and I need to know how to answer a couple questions.  Hurry!"

"Hi Bob, me again.  I have one more question I need help with.  Thanks so much.  I owe you one buddy."

"Sorry to bother you again Bob.  Can you feed me the answer to one more question? I owe you some tickets to the game."

Why would someone need helping taking our assessment?  Because the questions are asked in a sales context, not a social context, and your candidates may not know the ideal answers.  As a matter of fact, most salespeople, even veterans, don't know the best answers because all of the answers could correlate to how they think and act in sales situations - methods and beliefs that aren't necessarily the best for sales success.

Is there something you would love to know about your next sales candidates?  Tell me what it is and I'll respond and let you know if we do that already or if we can do that in the future.  You can influence what we report! Here's an example: "Can you tell us whether our candidate would be able to go into a new market, where we are totally unknown, get through to CEO's, sell a high-end consulting service that is also priced higher than the well-known competition, and close this business in 2 calls?

If you don't use Objective Management Group's assessments, don't feel left out. Just take one minute (that's all - I promise) and complete this very simple survey of between 1 and 5 questions.  Non-users only!!!