Why Did The Move from Outside to Inside Sales Take So Long? 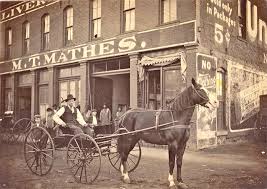 By the way, inside sales is a term that no longer works for me because it could refer to any of the following roles:

Outside sales has traditionally been associated with a territory, assigned accounts, and/or new business development, where customers would place orders with inside salespeople between visits.  I have purposely over-simplified the role of outside sales in order to save time and get to my point.

The change that is taking place simply takes the outside sales role and brings that role to the phone.  Why?  It:

Of course, there will be exceptions.  This won't work for all industries, verticals and companies, but it has been taking place for a few years now and is occurring as I write this.

Back to my original question, why did this move take so long?

If we look more closely at the outside salesperson, we can see that the role has changed over time.  After all, this was the original traveling salesperson, going from village to village, town to town and city to city in a horse and buggy, perhaps sending via mail, thank-you notes and advanced notices of visits.  The horse and buggy was replaced by the car.  The telephone replaced the write-ahead letter.  The landline phone is being replaced by the cellphone and VoIP.  The computer replaced the typewriter.  Highways replaced back roads which replaced dirt paths.  And email is replacing mail.  Online ordering is replacing phone ordering which is replacing the act of walking into a store and making a purchase.  Most of these changes occurred over decades.  So, it is only natural that this change from outside to inside sales takes place as well.  But why did it take so long?

I don't have an answer beyond the cliché, "It's always been done that way."

When you travel by air, flight attendants still recite or play video that shows how to buckle a seat belt.  That made sense before automobile seat belts became mandatory in the 70's, but it doesn't make sense in a generation where everyone has been buckling seat belts since they were old enough to get into a car by themselves.  It's always been done that way.

In a changing world where technology pulls us kicking and screaming into new systems, processes and procedures that promise ease of use, reduced cost and huge savings of time, the only things that remain the same are that we have less time, most companies earn less money and everyone must constantly learn new ways to do things.

Outside salespeople are simply the latest in that group to succumb to change.  The more important lesson though, is that to retain their positions, they must adapt to their new roles!  They will still have responsibility for the entire sales process, but by phone instead of face-to-face.  Selling by phone is not the same and if they don't change, they will end up where the buggies ended up - in museums.