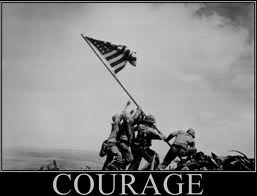 We went to the movie, We Bought a Zoo and while it wasn't the comedy we expected it to be, it did have this: 20 seconds of courage.  Several times during the film, it was necessary for one of the characters to possess 20 seconds of courage; for Benjamin to meet the woman he would marry, for Dylan to knock on Ellie's window, for Benjamin to confront the escaped grizzly bear, and for MacCready to hold off the lion while in its cage.

Terry recommended that I read Unbroken - A World War II Story of Survival, Resiliance and Redemption.  It was a tremendous book and I leaned so much that I never knew about that war.  But more captivating was the story about Louie Zamperini and his courage and resilience.  He could have resigned himself to his fate countless times in his life and during the war but always had something to keep him going, to make it through one more day, one more hour and one more minute.  He, and his family back home, never gave up.  Even when it was completely hopeless, when he was on death's doorstep, when the Military announced his death, there was faith that somehow, some way, he would survive and things would be OK.

Hope isn't enough, but faith and courage are.  If salespeople can apply the 20 seconds of courage rule to every challenging or scary situation they encounter, and simply do what they are afraid of, good things will happen.  When things go wrong - and they surely will - if they can have the faith to hang in there for one more minute, one more hour or one more day, knowing that if they do everything in their power (with their fate in their control) rather than relying on hope, they will achieve the desired outcome.