Would Henry Ford be Able to Sell Cars Today? 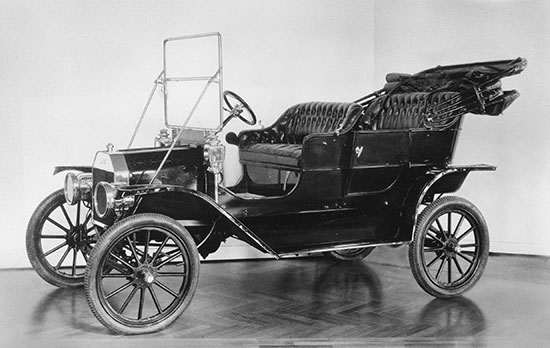 Cars were in the news this week when GM announced they were closing plants in the USA and President Trump pushed back.  So it got me wondering...

What would Henry Ford think if he were alive today?  I'm thinking that he would ask, "What the hell happened to my motor car and what are all these SUV's, crossovers, smart cars, hybrids and electric cars?  And what are all these pictures, icons, buttons, knobs and dials for?"  I think he would also say, "So let me get this straight.  You need to pay for a government issued license and pass an exam to operate it?  You need to register the motor car with the government and pay for that too?  You need to buy insurance before you can use it?  You have to pay an excise tax to your city or town to maintain ownership? And they sell for how much?  Holy shit!  What did they do to my Model T?  I innovated a car, not a home on wheels!"

Ford was the entrepreneur who founded Ford Motor Company after the turn of the last century but Karl Benz, from Germany, actually invented the motor car.  I would venture to bet that Ford was the better salesman!

My Grandfather sold cars back in the day when you had to teach someone to drive it before they could buy it.  Whether in my Grandfather's day, or today, cars are a big investment and customers must jump through a lot of hoops to buy a car.  Sure, they're a necessity.  Sure, they can be a symbol of success.  Sure, the auto industry has leveraged financing and leasing to make them affordable for everyone.  But do we have to buy them every 3 years?  We don't have to but we do it anyway to the tune of more than 17 million vehicles sold in the United States in 2017.  While that pales in comparison to Apple's 217 million iPhones sold in 2017, their phones are a fraction of the cost of a car, although they can set you back as much as or more than a monthly car payment.

For some, cars are a necessary evil, a means of getting from point A to point B when public transportation, bicycles or walking won't do.  But most people just love to buy new cars.  You're familiar with the new car smell.  I knew a guy who bought, traded in and bought again every 3 months!  That's how long it took for the elation of driving a new car to wear off.  Or maybe it was the smell.  For me, after 2 years I'm usually ready to buy again.

Car salespeople aren't very good at selling and for the most part, they don't even conduct the actual closing. The only challenge that car salespeople seem to have - and it's not an easy challenge for salespeople to overcome - is that the entire automobile industry is an example of a transactional, price-based model.

If weak auto salespeople can sell 17 million expensive cars a year despite all of the hoops, why do B2B salespeople struggle to close relatively inexpensive products and services?  Auto salespeople are order takers.  Their customers will buy a car from someone and it's just a matter of from whom.  That's not very different from most B2B customers who will also buy from someone.  As a matter of fact, around 75% of B2B salespeople are order takers.  Do they get the business because of their special relationships?  Their discounted prices? Their superior products? Are they actually helping their prospects reach the conclusion that there is greater value from buying from them?  In the 75% group, it's probably price, product or relationship.  For the top 25%, it's probably their ability to guide their prospects to the correct conclusion.

What do the top 10% do differently from the bottom 10%?  Almost everything!  You can see those differences here where you can compare our data from the most recent 500,000 or so sales assessments.

The best salespeople have superior Sales DNA, don't make excuses, have strong commitment and excel at selling value and closing.  Back in Henry Ford's day, it was more like a Field of Dreams experience - build it and they will come.  That still seems to hold true for cars and iPhones but for everyone else, it's a different story.  Today, you'd best be able to follow a milestone-based sales process, differentiate by taking a consultative approach, sell value, thoroughly qualify and close.