Your Last Chance to Make a Good First Impression I can still remember my first (unintentional) lesson about first impressions.  My family was gathered at my grandfather's house to watch the debut of the Beatles on The Ed Sullivan show.  It was February 9, 1964 and at 8 years old, I was one of seventy-three million people watching the show that night.  I was as excited about this show as I would be later that same year when I attended my first Red Sox baseball game at Fenway Park.  That is pretty excited!

Sitting on the carpet, I was completely focused on seeing and hearing The Beatles play five of their hit songs, but my mother was doing color commentary from the plastic covered sofa behind me.

She said, "He's cleaner than the other 3", referring to Paul McCartney, who had straighter teeth, and a face more suitable for the mop top hair style shared by the four of them.

There it was, my first lesson in judging people by how they looked, and more specifically, what "clean" did and did not look like.

We were all exposed to unintentional lessons like that when we were young and those lessons stay with us today.  My father was an optometrist and around a quarter of his patients were on welfare.  While they were entitled to the same eye examination as everyone else, they were not allowed to choose from the same selection of eye glasses  and were not allowed to wear contact lenses - unless they could pay the difference.  Therefore, I assumed that anyone I saw wearing "those glasses" must be on welfare.

15 years later, when I was in the music business, a man who looked like he spent the night sleeping on the side of the road, bought the most expensive guitar I had in stock.  He paid cash.

Enough for the trip down memory lane.

Objective Management Group (OMG), which has evaluated or assessed 1,869,505 salespeople, has a finding I haven't written much about called Sales Posturing.  In a nutshell, Posturing measures first impressions, how memorable you are, and how effectively you differentiate yourself from the competition. In the table below, you'll see scores for Posturing,  as well as Relationship Building which is one of the 21 Sales Core Competencies. 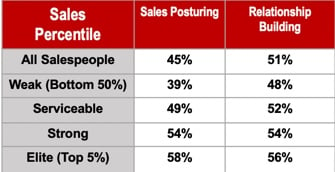 While there is a correlation between both sets of scores and the overall effectiveness level of salespeople, the difference in scores is minuscule in comparison to creating urgency, The 21 Sales Core Competencies, Closing, and 5 Scores Related to Money.  This proves my point that most salespeople, even the great ones, do not pay enough attention to the quality of their first impressions.

How much focus have you given to how you make your first impression?  Here are 10 things you can control to assure that you make a great first impression.  For a lot of these, Goldilocks and  the Three Bears will be a good guide.  Not too much, not too little, but just right:

Thirty-three years ago, when I was far less experienced in the sales development space, my first impressions were not very good and it was represented by the quality of my clients at the time.  Fortunately, thirty-three years provides a nice, long runway for improvement!