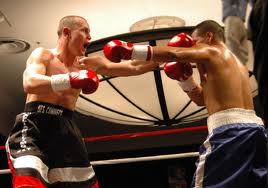 HBO’s 24/7 chronicles the pre-fight training camp for significant upcoming bouts.  This Saturday, Manny Pacquiao and Juan Manuel Marquez square off in Las Vegas.  It’s the fourth time that they’ve met.  Pacquiao leads the series 2-1, but Marquez defeated Pacquiao in their last bout.  Expectations and excitement levels are high as the boxing experts see these two being incredibly closely-matched.  We definitely can expect a great fight on Saturday.

Behind the fighters are two of the greatest cornermen in the game, Freddie Roach and the legendary Nacho Beristan.  Nacho’s fighters have won an amazing 25 world championships.  Freddie Roach has trained some of the best fighters in the world and has a storybook following.

What struck me was the nature of the relationship between the fighters and their coaches.  To say they trust and respect each other is a huge understatement.  And, the personal rivalry between Nacho and Freddie is perhaps greater than that of the fighters.  In short, there is a tremendous amount at stake including pride, history and legacy.

Putting the chemistry between the cornermen and fighters aside for a moment, Freddie and Nacho can teach us a lot about being world-class coaches and mentors.

Listening to Manny and Juan talk about their coaches was similar to hearing grandchildren laud praise, honor, respect and unconditional love on their most adored grandparent.  It was a thing of beauty and a wonderful illustration of people helping people for all the right reasons.  My sense is that it’s almost more important to the fighters that they win for their coach than for themselves.

How committed to your salespeople are you?  Would they walk through walls if you asked them?  Is your relationship based on deep respect and trust?  Which elements of a cornerman’s approach are you missing and what are you going to do next?  A sales force evaluation would be a great first step into the ring!  Why not contact me directly?